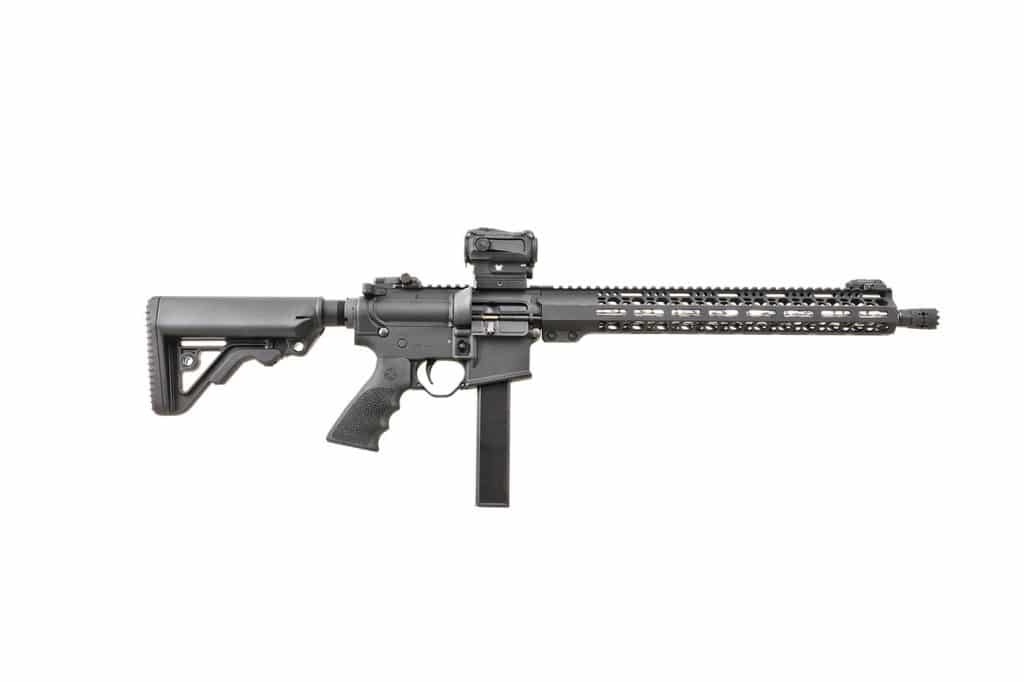 PCCs are niche firearms . . . and they fit more niches than ever. This one fits especially nicely.

The pistol caliber carbine (PCC) has been around since the immediate post-Civil War era. “Back in the day,” they were chambered for rounds like .44 rimfire and .44-40; today, the most popular caliber (except for cowboy action shooting) is 9mm. For this issue, we test one such AR-15 platform: the LAR-9 from Rock River Arms, a brand highly respected among serious shooters. Ours is the competition carbine variation.

Weighing just under seven and a half pounds, the test gun came with a barrel fluted in chain link pattern, to lighten weight and give lots of cooling surface, and surrounded by an extended mid-length handguard. At the other end we find Rock River Arms’ Operator CAR telescoping stock. With the stock fully contracted, the overall length of this 16” barrel carbine is three and a quarter inches shorter than a yardstick.

The magazine closely resembles that of an UZI, but is not interchangeable. The trigger guard is the popular bowed-downward style, allowing for deep-cold use with thick gloved fingers. The Picatinny top rail runs full length, from rear of receiver to front of handguard. Sights, including backup irons, are the user’s responsibility. The crew at home base at On Target had mounted a Vortex red dot optic and Magpul MBUS Pro flip-up sights before the rifle got to me.

The first thing all of us on the test team noticed was the fast, feather-light handling afforded by the light barrel. The weight felt centered more toward the firing hand, allowing the LAR-9 to track just lightning-fast between multiple targets, a handling feature that should translate equally well to moving targets.

Another big advantage of that light front end comes in “wounded defender” shooting. That rearward balance point makes it easier to run this gun one-handed from the shoulder, and still get hits.

Measured with a Lyman digital gauge, the trigger pull ran 4.40 pounds average at the center, where the shooter’s trigger finger normally comes to rest. The toe, or bottom tip of the trigger, is farther away from the pivot point and thus gives more leverage to the entity pressing it back. In this case, pull weight was 3.87 pounds at the toe. That is more significant with a firearm like this than usual, because that bowed winter trigger guard actually allows the human index finger to comfortably get that low on the trigger.

The trigger assembly is Rock River’s own two-stage unit. RRA’s triggers have made a lot of friends among shooters, and this specimen was no exception: the movement of the trigger was always smooth, and the release of the sear always crisp.

The berm at the 100-yard line where my Caldwell Stable Table is set up was closed temporarily for reconstruction, and my new Caldwell rest designed for AR-15s and similar rifles didn’t arrive until the test gun had been packed up for return. Thus, accuracy testing was done from an impromptu bench rest on my 25-yard pistol range. This distance obviously isn’t the litmus test for a high-powered rifle, but remember, we were using a pistol caliber carbine here.

Many shooters feel that the operative term in “pistol caliber carbine” is actually “pistol.” Partly because it fires a pistol round, of course, but partly also because of Clint Smith. Clint was the one who really established the discipline he called Urban Rifle training in America, and one definition was the use of a rifle at what had heretofore been seen as “pistol fighting distance.”

As usual, each 5-shot group was measured twice, once for all five and once again for best three, the latter measurement generally balancing enough unnoticed human error to give about the same group size as the same gun and ammo would be expected to deliver for all five rounds from a machine rest. Measurements were taken center to center between the farthest flung bullet holes, to the nearest 0.05”. The three most popular bullet weights for the caliber were tested.