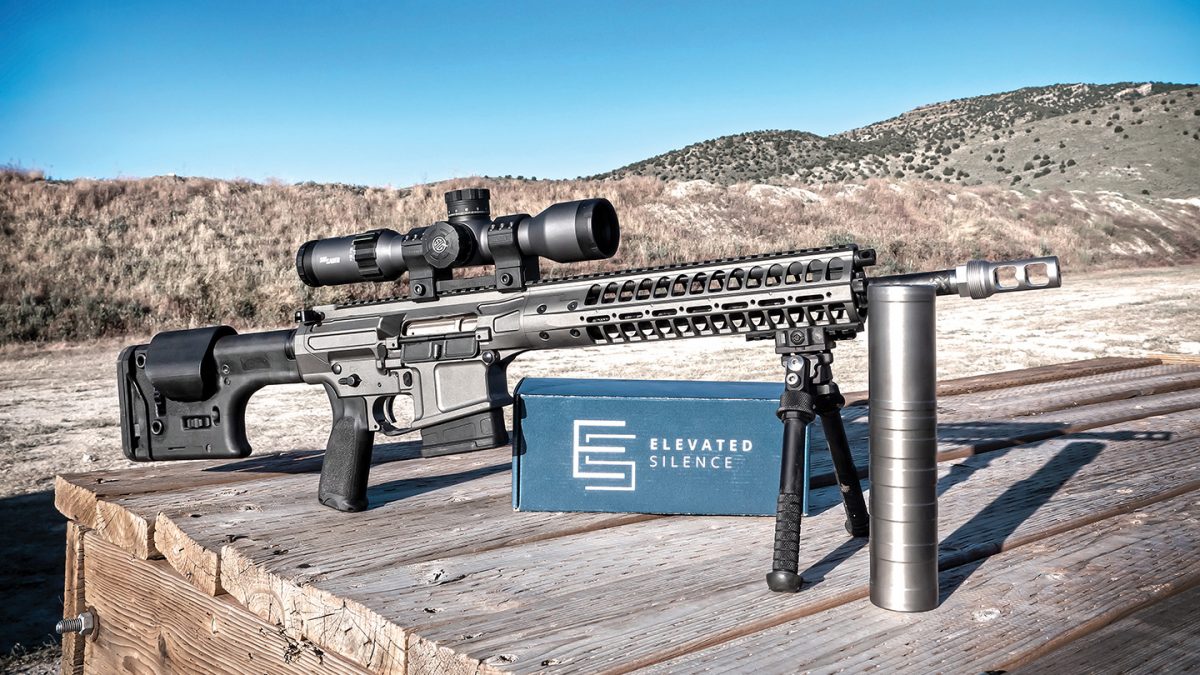 Not your average cross-platform suppressor

Rather than changing a few things on a conventional suppressor design and stuffing it in a tube, Elevated Silence has spent years designing its latest suppressor, the Evolution. Much of the attention was spent on the muzzle brake and how it works with the suppressor internals, each being designed to direct gas away from the bullet as it passes through the suppressor.

This adds to overall consistency over a broad spectrum of calibers with repeatable accuracy and a solid return to zero. It ships with three muzzle brakes covering the most popular sizes, including .30-caliber, 6.5mm./.264 and 5.56mm/.224. The tube is grade 9 Titanium, while the core is Grade 5 Titanium, keeping it light. The suppressor weighed in at 15.3 ounces, the brakes at 4 ounces each, for a combined weight of 19.3 ounces. Brakes are all two-port with threads on the outside for attachment of the suppressor. This is by far the most effective design for minimizing impact shift and providing a decent return to zero. The only visible difference among the brakes is the size of the hole in the end. Length of the suppressor is 8.5 inches, and diameter is 1.75 inches.

Four rifles were used for testing—all proven performers. My LWRCI REPR 2 with a 16-inch .308 Proof Research Barrel was the primary test bed.  Geissele’s URGI clone uses a 14.5-inch .556 NATO barrel and non-adjustable gas block. Robar’s PolymAR 15 .556 NATO has an adjustable gas block and a Proof Research 16-inch barrel. Another LWRCI, my M6IC with 8.5-inch barrel, covered the short end of the spectrum. Lastly, the Seekins Precision Havak chambered in 6.5PRC covered high pressure rounds in a bolt-action rifle to test the suppressor’s limits.

Without the proper equipment it’s impossible to accurately “measure” sound level, and all I have is three decades of shooting suppressors as a gauge. Elevated Silence claims less the 140dB in all calibers, and in my experience, it was as quiet as most, quieter than some, and it was quiet over the entire spectrum, including the 8.5-inch barrel (not all that common). It was quieter then several suppressors tested recently on the 6.5PRC.

Recoil reduction was noticeable on the Havak (6.5PRC), when compared to four different suppressors tested in the last two weeks. Tuned properly on the LWRCI REPR 2 and the Robar PolymAR 15 it was soft shooting. With no ability to turn the gas down on the Geissele, it was a tad harsh, but no different than most; same with the LWRCI M6IC short barrel.