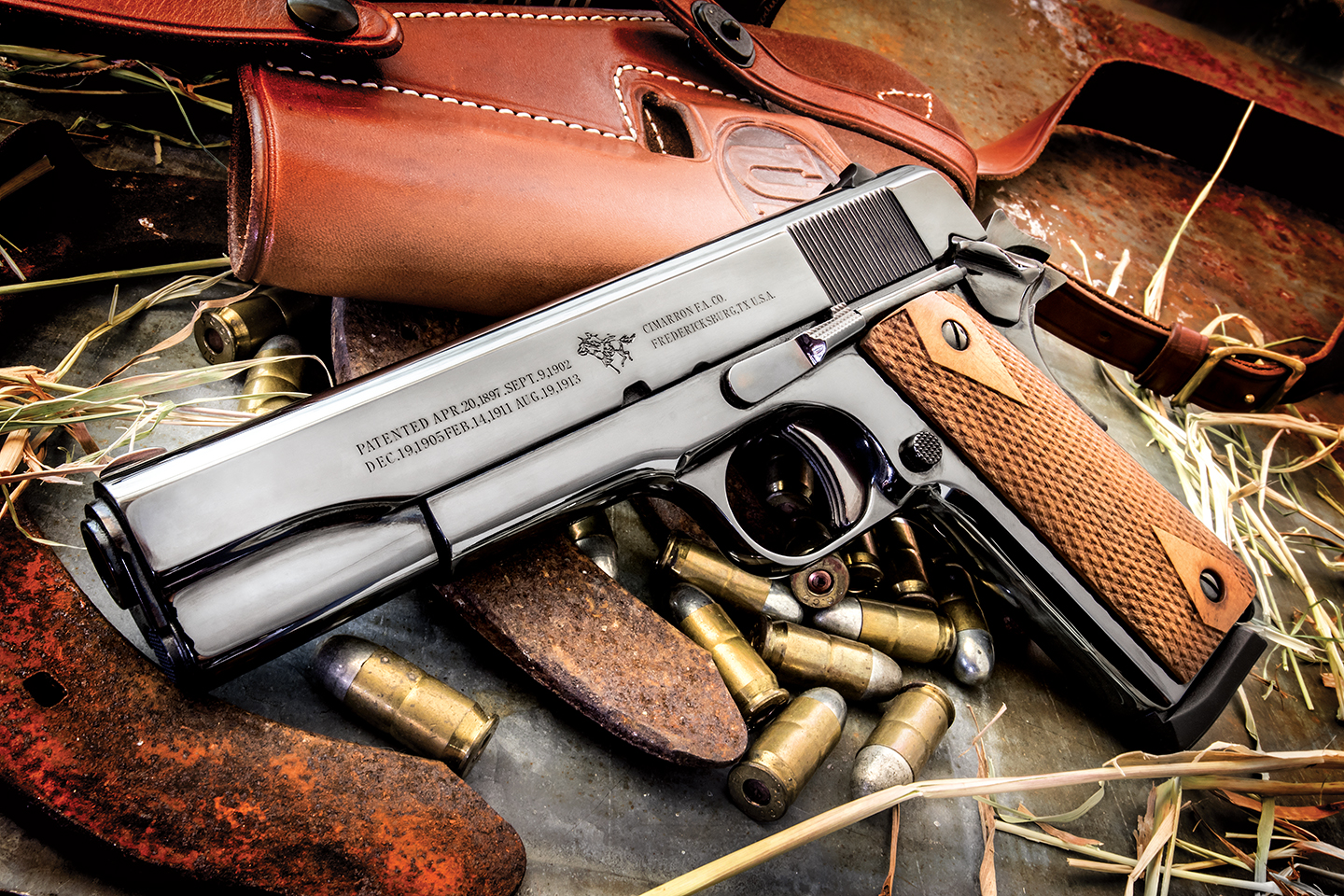 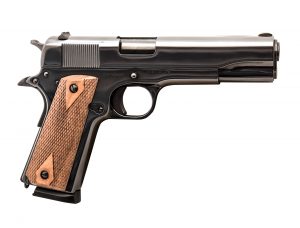 Wild Bunch shooting competition is a sub-set of SASS, the Single Action Shooting Society, that did so much to popularize “cowboy matches.” It’s based on the 1969 movie of the same title. Costume is required, either Old West garb of early 20th Century or military uniforms. The rifle will be a period lever-action, pump or military-style bolt action, ideally a Springfield .30-06 as in the movie; a Winchester Model 97 pump for the shotgun . . . and, for the pistol, a 1911 .45 auto. The latter is the subject of this article. Cimarron’s Chip Klaiber told On Target, “The Cimarron Firearms 1911 is a reproduction of the original 1911 that was issued to our troops during WWI and was manufactured by Colt from 1911 to 1924.

There are many people who still appreciate owning and using a ‘period correct and historically accurate’ pistol. The Cimarron Firearms 1911 has passed the ATF Drop Test. We offer this pistol so that those who participate in the Wild Bunch Shooting Competitions have a gun that meets the requirements and rules of the competition. We have several customers who also purchase this 1911 pistol as a self-protection piece. Yes, it will safely shoot hollow point ammunition; however, everyone knows that the 1911 pistol has always operated best with round nose ball ammunition. The semi-wadcutter was and is designed for revolvers, not semi-automatic pistols.”  Chip credits Mike Harvey as “the brain behind all of Cimarron Firearms guns,” who came up with the Wild Bunch Combo idea.

The pistol is made for Cimarron by Armscor in the Philippines, as 1911 connoisseurs will recognize from the very slightly different configuration of its trigger guard. But the first thing you notice on the Wild Bunch gun is the finish. It’s a gorgeous, high polish blue, of a kind seldom seen in this pistol’s sub-$1,000 price range. The stocks are handsome walnut, checkered with the double diamond pattern historically identified with first generation 1911s. It’s a pistol you’ll be proud to show off to your friends.

Feature for feature, the Wild Bunch pistol is something of a cross-breed, mixing the original 1911 with the 1911A1 of the mid-1920s. The trigger is solid, to comply with Wild Bunch rules for pistols shot in the Traditional category. It is shorter than on the original 1911 but a tad longer than that of the A1 modification. The frame is true to the original and lacks the finger recesses at the rear of the trigger guard which distinguish post-1920 commercial models and the military 1911A1s. The tiny round rear notch and blade front sight are replaced with 1911A1 configuration sights: still small, but with a square notch in back and a bit more substance up front. The lanyard loop is present at the butt end of the mainspring housing. The hammer spur is checkered, “old style.” The short-tang, first-issue 1911 grip safety, that bit the hands of so many doughboys in World War I that it led to a longer tang on the 1911A1, has thankfully been replaced by a long tang on the Wild Bunch gun also. The grip safety is narrow, not the currently popular beavertail, but in hundreds of full-power .45 rounds it never bit or even discomforted your correspondent here. SASS understands, and these little crossings of the time machine are within their rules.

I’m sure some folks will buy this gun just for its looks, but Mike Harvey designed it to shoot. The trigger pull on our sample was not bad at all. Pull weight, as measured on a Lyman digital gauge, averaged 5.7 pounds. If I recall correctly, Army Ordnance’s 1911 spec for the original pistol was five to seven pounds for trigger pull, so the weight is historically correct.

The trigger was well adjusted on our test sample. In the hand, there was a slight take-up followed by a short, smooth roll before the hammer fell. All in all, a good “street trigger” for a single-action auto pistol.

In keeping with Wild Bunch Traditional Division rules, the grip-frame itself is smooth: those rules don’t allow for checkered or otherwise modified front or back straps. It’s between your palm and the checkered walnut to prevent slippage. I found that feature (the rear of the flat mainspring housing is flat and smooth in doughboy tradition also) encouraged the hard hold that is desirable when firing any .45.

Speaking of 1911 and traditions, one such was that the gun was designed for 230-grain hardball and needed tweaking for hollow point and semi-wadcutter loads. Our test sample lived up to that tradition.

At the beginning, the test gun experienced 6 o’clock misfeeds, particularly on the first hand-chambered round of JHP. We started with Winchester white box 230-grain JHP, and the incompatibility was strong. When Remington Express 185-grain JHP, which normally feeds in anything that feeds ball, was found to choke, it was time to diagnose and remedy.

Over the decades, we learned that if a gun wasn’t running with hollow points and we weren’t ready to have a pistolsmith throat the feedway and chamber, there were a few things to try. In no particular order: More lube. Wilson magazines. A break-in shooting period. Ball ammo. If running an 8-round mag, download to seven. We tried ‘em all, and finally solved the problem.

The pistol worked with round nose full metal jacket 230-grain .45 ACP from the beginning, with the provided ACT magazine and the Wilsons. With Wilson 47D mags the pistol ran 100% with the Remington JHP, 200-grain lead semi-wadcutters from Black Hills, and even the wide-mouth Winchester JHPs. By the time we passed the often-recommended 200-round break-in point, everything was working with the Wilson mags and all but the Winchester JHP with the ACT mag. (I usually don’t see problems with the ACT product, and this particular magazine may simply have not played well with this particular pistol. That sort of thing happens.) There is a reason that a 200-round break-in period became gospel among those of us who shot 1911s in “the days of yesteryear” . . . and the Wild Bunch pistol is a yesteryear concept.

Wild Bunch matches require all-lead bullets due to the steel targets, so it was fortuitous indeed that the Wild Bunch pistol shot its best with such a load. Black Hills’ lead semi-wadcutter bullet, weighing 200 grains in what looks like the Hensley & Gibbs #68 format, plunked five shots into 1.45 inches, fired hand-held from a Matrix rest on a concrete bench at 25 yards. With hand-held shooting, I’ve long found that measuring the best three shots eliminates enough human error to correlate very well with what the same pistol and load will do from a Ransom machine rest with all five, and is a lot easier for readers to duplicate with their own guns for comparison purposes. The best 3-shot group with this LSWC round measured under an inch: 0.95” center to center.

Chip Klaiber mentioned that some traditionalists bought this gun for personal defense. For that, you want the jacketed hollow points forbidden in Wild Bunch competition. I shot the test Wild Bunch pistol off the bench with Remington Express (green and yellow box) 185-grain JHP, and it delivered a 4.20” 5-shot group, with the best three in 2.85”. That should certainly be accurate enough for home defense.

The pistol came out of the box with the rear sight off center to the right, which brought groups in the same direction. This sort of thing is an easy fix, simply drifting it to port in its dovetail, and not a big deal.

The Rest of the Combo

The Wild Bunch Combo comes with a beautifully made copy of the M7 “tanker” chest holster, like the one William Holden wore in his starring role as gang leader “Pike” in the “Wild Bunch” movie which is set in Pre-WWI Mexico. I found this strange since I’ve always associated the M7 rig with the WWII period. While the workmanship was beautiful, the original design was not. The security strap depresses the grip safety when fastened, and the fingers have to dig between the grip panel, plus the strap takes a distinct extra movement to release. But tradition, beauty and great workmanship mean a lot to this gun’s target market.

MSRP is $995 for the gun and holster. What you’re getting is a not-quite-original 1911 that is absolutely beautiful to look at, can be made to do what it was designed to do, and comes with a strikingly handsome holster. If those are your needs, the price is right. And I can tell you, the gun was fun. See it at your nearest dealer, or for more information contact Cimarron Firearms; Tel.: (830) 997-0802; Web: www.cimarron-firearms.com