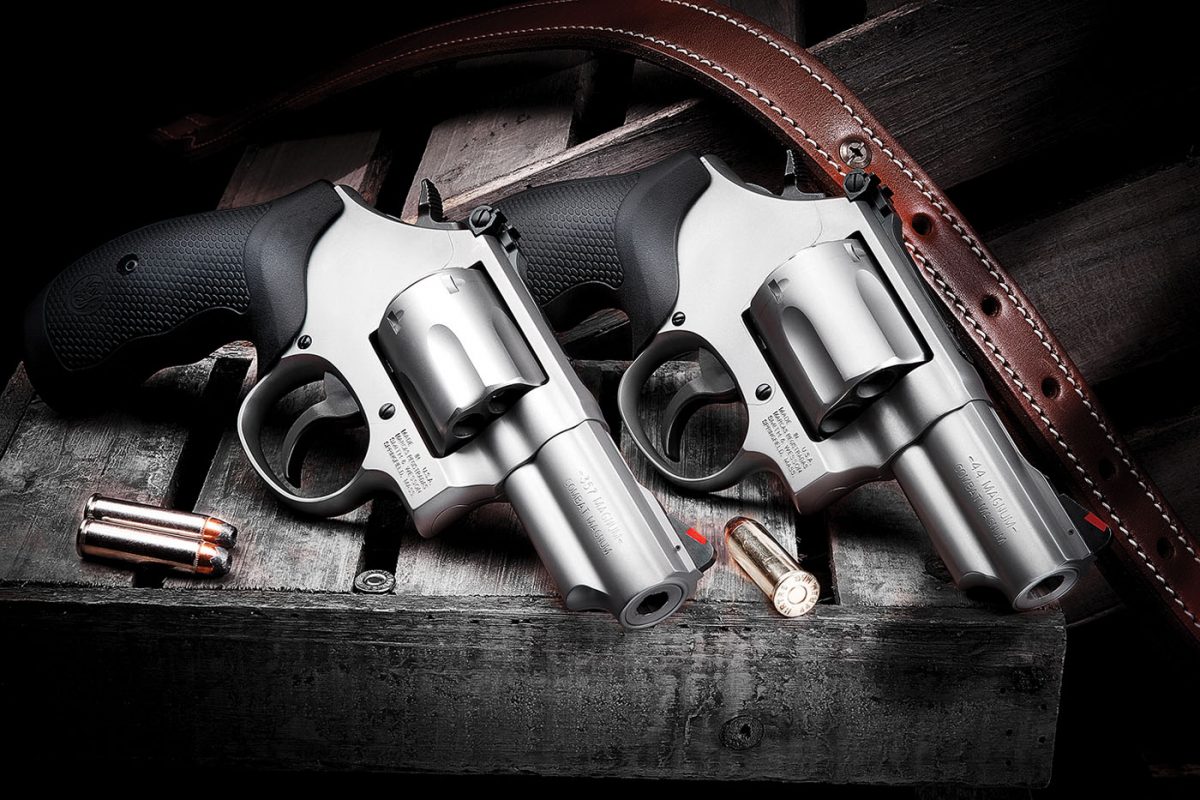 From an MTM rest on a concrete bench at 25 yards, we started with a good, controllable, urban-defense load, Speer’s Blazer .44 Special with 200-grain Gold Dot bullet. Recoil was quite mild, and it delivered a low-left cluster that measured 2.45” center to center for all five, with the best three in 1.15”. Next up was a good, affordable, all-around field load, MagTech’s full-power .44 Magnum with 240-grain jacketed soft point bullet. The five-shot group went 2.90”, with four of those hits in 1.80” and the best three under an inch at 0.85”. For something heavier we chose the 250-grain Partition Gold .44 Magnum load from Winchester’s Supreme line. This had the sharpest muzzle jump, but delivered 2.50” for all five shots with four in 1.70” and 0.95” for best three. In a world where four inches at 25 yards is considered acceptable accuracy for a full-size service pistol, keeping everything under three inches at that distance and two out of three under an inch for best three, my accuracy needs were certainly met by this sub-three-inch barrel .44 Magnum.

As with the 66-8, the 69’s double-action pull was OK for smoothness, but heavy enough to go past the measuring gauge’s twelve-pound maximum. Single action pull was crisp and averaged between five and six pounds, but felt like less.

But the big question is, will this smaller, lighter .44 Magnum stand the gaff of regular practice shooting with full power loads? Once again, I queried Reichard, who said: “They’re standing up excellently so far. I have half a dozen of them out there that I’m keeping track of, and none have come back. They’re all in the hands of serious shooters who put a lot of rounds through them. The main complaint is the recoil. A couple of guys have bought the 2 ¾”, and they really like those.” For action work, I had to get a couple of special tools to disassemble the extractor rod, because instead of the whole thing unscrewing out of the cylinder there’s a knob on the end that unscrews. You need a clamp to allow you to hold the rod itself.

On both of these modern S&Ws, a ball-detent lockup between yoke and frame replaces the traditional second locking point between tip of ejector rod and front of ejector rod housing. Both have two-piece barrels. Both have the internal security lock which S&W purists hate, and the change in shape to the frame. Coupled with the different shape of the ejector rod housing and the recently-adopted “rubber” grips, we old farts who collect S&Ws see them as a Salvador Dali rendering of the guns we grew up with. But, for the modern shooter, they comprise in one hand the strongest .357 Combat Magnum yet produced, and in the other, the most portable-yet-shootable of Smith & Wesson’s .44 Magnums.

At $849 apiece, these carry-size Combat Magnums are in the current ballpark for price vis-à-vis quality. They may induce furrowed eyebrows among those of us who imprinted on the classic first generation: The ejector shrouds aren’t there, nor even is the whole silhouette, with a frame that goes higher to encompass the internal lock so hated by S&W traditionalists. But, for the person who wants a powerful fighting revolver that works, the Model 66-8 .357 Magnum and the Model 69 .44 Magnum are very functional choices. Contact Smith & Wesson, Dept. OT; Tel.: (800) 331-0852; Web: www.smith-wesson.com