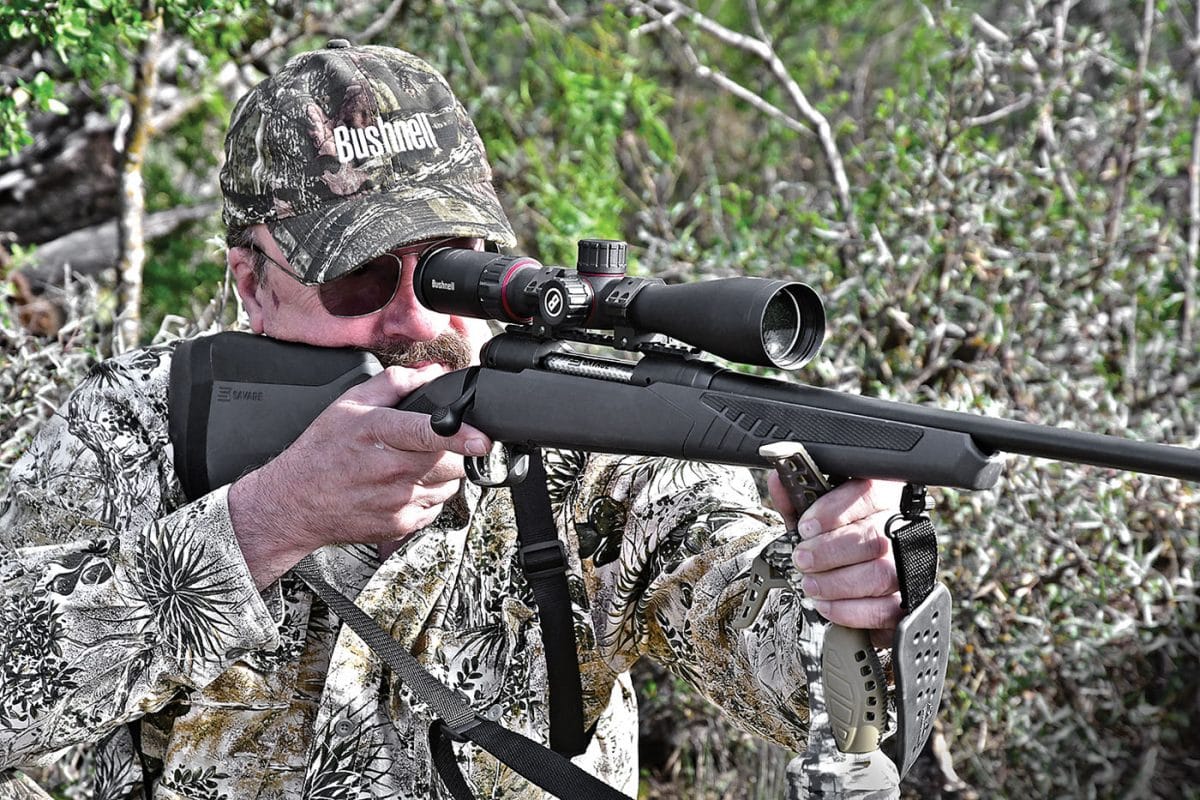 Bushnell has upped its game with three new product lines that may change the way you view hunting optics.

The harsh glare of the summer sun on a Texas afternoon was tough on the eyes, and this was one time I needed to see clearly.

I was watching a group of Axis deer milling around a water hole, moving in and out of deep shadows in the brush, from a popup Primos SurroundView blind. Intent on swatting a plump doe into the freezer, I slowly raised a new pair of Bushnell Forge 8X42 binoculars and began to study the deer.

And boy, did I study. I already had bragging rights from shooting the biggest Axis buck taken by our hunting party on the 20,000-acre Canyon Ranch, but as odd as it may sound, shooting an Axis doe was a bigger challenge.

The problem is that Axis deer, unlike native North American deer, can grow and shed antlers at any time of year. A buck with tiny spikes or bare pedicles atop his head can be exceedingly difficult to distinguish from an Axis doe at distance. On this hunt, shooting a second buck—any buck—came with a steep price tag, and no one in camp wanted to be remembered as That Guy.

Fortunately, I was equipped with some fantastic, all-new hunting optics unveiled by Bushnell this year, including the Forge binos and a Nitro 2.5-10X44 scope parked atop a Savage 110 Hunter AccuFit rifle chambered for the venerable .30-06 Springfield cartridge. Both the scope and the binos delivered the crystal clarity I needed to single out a good doe and drop her cleanly with the same Federal Edge TLR 175-grain ammo I had used on my big buck.

I was already intrigued by Bushnell’s new lines of hunting optics, having been treated to a closed-door demo of the products at last year’s SHOT show. Several new rifle scopes were compared, side by side, with competing brands while being subjected to a steam machine, dust and even a magic marker applied directly to the objective lens of the scopes.

The new Bushnell optics refused to fog up and repelled dust while the ink from the magic marker simply formed tiny beads. According to Bushnell, this is thanks to a new proprietary EXO Barrier lens coating that bonds molecularly with the lens and fills microscopic pores in the glass. I was impressed, and couldn’t wait to test the new optics in the field. As my hunt demonstrated, those sharp optics made all the difference in giving me the visual assurance to take a shot I might not have taken using lesser optics.

These are not, by the way, just repackaged versions of old models. They are completely new designs, reengineered to deliver maximum performance when it counts. Here’s a look at the three new lines from Bushnell.

It takes a lot to stand out in the super-competitive hunting optics market these days, and Bushnell has managed to do just that with its new Forge line. As the cream of the crop of the three new lines of optics for hunters, Forge optics provide what Bushnell states to be 94 percent light transmission. In rifle scopes, the Forge line includes variations of three basic models, available in either first-focal-plane or second-focal-plane versions, in these power ranges: 2.5-15×50, 3-18×50 and 4.5-27×50.

Forge scopes offer a choice of Deploy MOA, Deploy MIL and DOA reticles, and come in either black or terrain brown colors. All are built on 30 mm tubes and feature elite glass with EXO Barrier and ultra-wide band coatings. They are designed to deliver optimum brightness, color rendition and excellent light transmission. The waterproof scopes have side parallax correction and exposed, locking zero-stop turrets. The scopes also have an adjustable-height, quick-throw lever that lets you instantly dial in more or less power. A sun shade and flip-up Butler Creek scope covers are included. Retail prices range from $899.95 to $1,139.95.

Forge binoculars, such as the pair I used on my hunt, give spectacular performance for a surprisingly affordable price. They are available in 8×42, 10×30 and 10×42 models with roof prisms, as well as a 15×56 model with an Abbe-Koenig prism costing quite a bit more. MSRPs for these models are, respectively, $419.95, $551.95, $575.95 and $959.95. Featuring ED (extra-low dispersion) glass, the binos have the same EXO Barrier and ultra-wide band coatings of the rifle scopes as well as dielectric and PC-3 phase coatings applied to the prisms to enhance resolution and contrast. While the pair I used was not super lightweight in the hand, the view they afforded was incredibly sharp and clear. It’s fair to say that I handed them back at the end of the hunt with great reluctance.