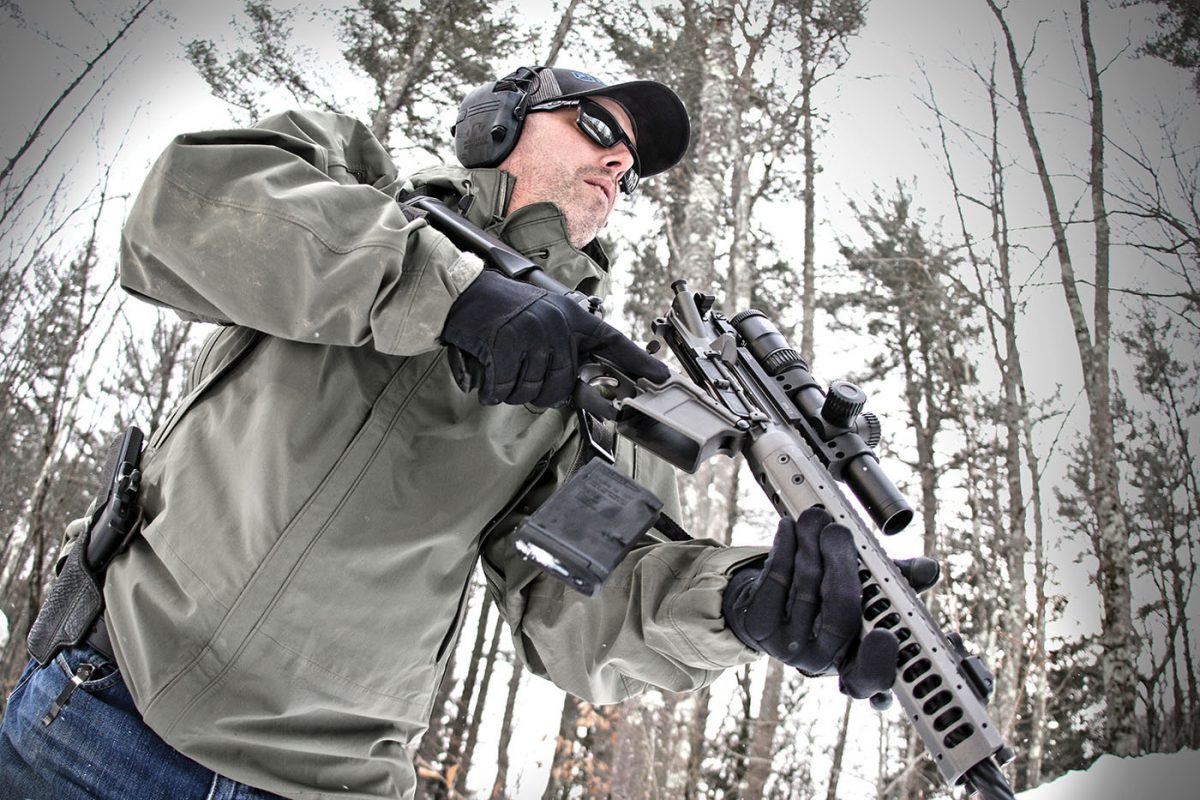 We mounted a Nikon Black Force 1000 1-4×24 riflescope with an illuminated Speedforce reticle (nikonsportoptics.com) to the upper rail with a Nikon XR Mount for the range. The Black Force 1000 features a 10-level illuminated reticle with “off” positions between each setting so you can turn it on in a hurry. And with the optional Switchview throw lever you can immediately zoom from 1X to 4X magnification without fumbling. With a Blue Force Gear Vickers 221 sling clicked in (blueforcegear.com), we grabbed a passel of .223 and 5.56 ammo, and went to work. For starters, the reloading procedure goes like this: After your last round, the bolt locks open. Hit the bolt release to send the bolt home, pull the extended rear takedown pin with your right hand and break the upper slightly with your left as your right releases the spent magazine via the magazine release that now operates normally. Close the upper, install the pin, pop in a fresh magazine, charge the weapon, and present to the target. With practice you can develop fluidity that allows reloading as fast as or faster than a conventional bullet button. And if you can’t stand the thought of a featureless stock or a goofy grip paddle on your weapon, it’s a nice solution to keeping your AR an AR in restrictive states.

We did our range testing at the 50-yard line at rest and immediately noted what a very balanced package the M6IC-A5 is. Recoil, despite being a piston design, is smooth and flat. As for accuracy, with the Black Force 1000 dialed up to 4X magnification we found the tight 1:7 twist delivered best performance with heavier bullets. Although we ran ammo from many manufacturers, our three best 5-round groups were with Black Hills ammo (black-hills.com). Of these, the 77-gr. .223 hollow point was the largest, with two adjoining holes and a group measuring 1.25 inches center to center. Next was the 68-gr. .223 Heavy Match HP, which delivered a ragged 7/8-inch hole. However, the M6IC-A5 performed best with Black Hills 77-gr. 5.56mm Tipped Match King, which sent four rounds through virtually the same hole. When you’re shooting .22-inch diameter bullets and your target only has a half inch group punched through the center of it, we’d say that’s more than acceptable accuracy from a 14.7-inch barrel. See it at your dealer, or for more information, contact LWRCI; Dept. OT; Tel.: (410) 901-1348; Web: www.lwrci.com.