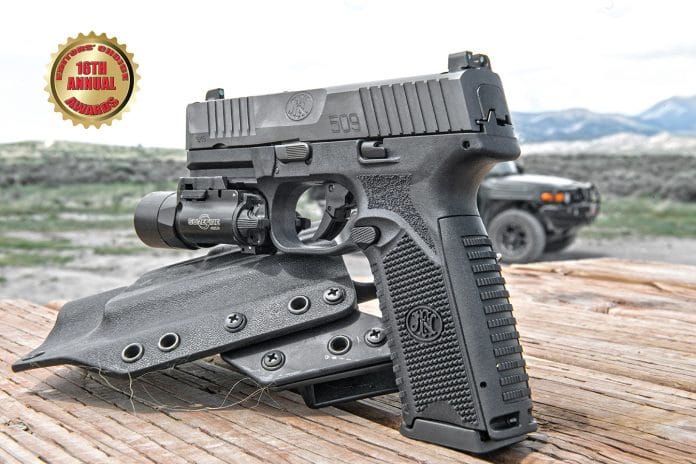 One of the bi-products of competitive military contracts is the weapons not chosen usually wind up hitting the commercial market, and many features requested by these competitions are valuable to all. The Army’s MHS (Military Handgun Selection) pistol contract is a perfect example, bringing some very solid pistols to the commercial market in 2017. The 9mm FN America FN509 ($649) is one of these pistols; given the requirements, they are solidly built, withstanding rigorous testing protocols including mind boggling round counts.

The FN509 is a polymer-frame, striker-fired, double-action-only pistol with a 4.0-inch barrel, two 17-round magazines and an empty weigh of 26.9 oz. FN America started with their FNS compact making changes as needed, first to meet the contract, then reaching out to the law enforcement and concealed carry world. The slide has been modified to include aggressive cocking serrations and rugged sights designed for use during unconventional reloads or drills. The rear sight makes it easy to run on your belt, boot, or other field expedient item. A track of sort sits atop the slide allowing for fast sight alignment. Texturing on the grip is best described as multi-faceted; there are ridges, dots, larger cuts, and typical stippling high on the grip for your off hand. The combination locks your grip in place with or without gloves. Interchangeable grip inserts (two total) let it fit most people’s hands. Ambidextrous magazine releases are longer, sit a bit higher, and are nicely stippled. The bore axis is about as good as it gets without your strong hand stopping the slide, with a beavertail to settle the web of your hand into.

Using a captive double recoil spring makes for soft shooting, while the robust external extractor insures proper extraction and ejection. It also means the 509 will probably outlast most owners. Take down is as simple as it gets: not sure a pistol gets more user serviceable.