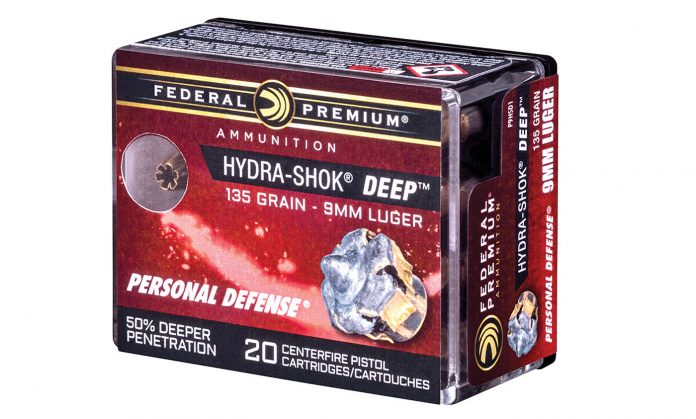 The Hydra-Shok bullet has been Federal Premium’s top-performing hollowpoint defensive bullet since its introduction 1989. But time moves on. The new Hydra-Shok Deep builds off the time-tested platform of the original Hydra-Shok, with design improvements that better meet modern performance measurements. The new bullet features a more robust center post and a core design that provides as much as 50 percent deeper penetration than the original Hydra-Shok bullet and competitor loads.

It penetrates 15-inches in bare ballistics gelatin, the optimal depth according to the FBI protocols, which is 50 percent deeper penetration than the original Hydra-Shok bullet, and achieves a 70 percent improvement in FBI protocol score. Its iconic center post design has been improved for better, more consistent expansion through FBI standard barriers. Hydra-Shok Deep employs a consistent, specially formulated propellant for the ultimate in repeatable precision, and features extremely reliable Federal primer. Hydra-Shok Deep is initially available in 135-grain 9mm with nickel-plated cases, but look for it in other defensive cartridges soon.