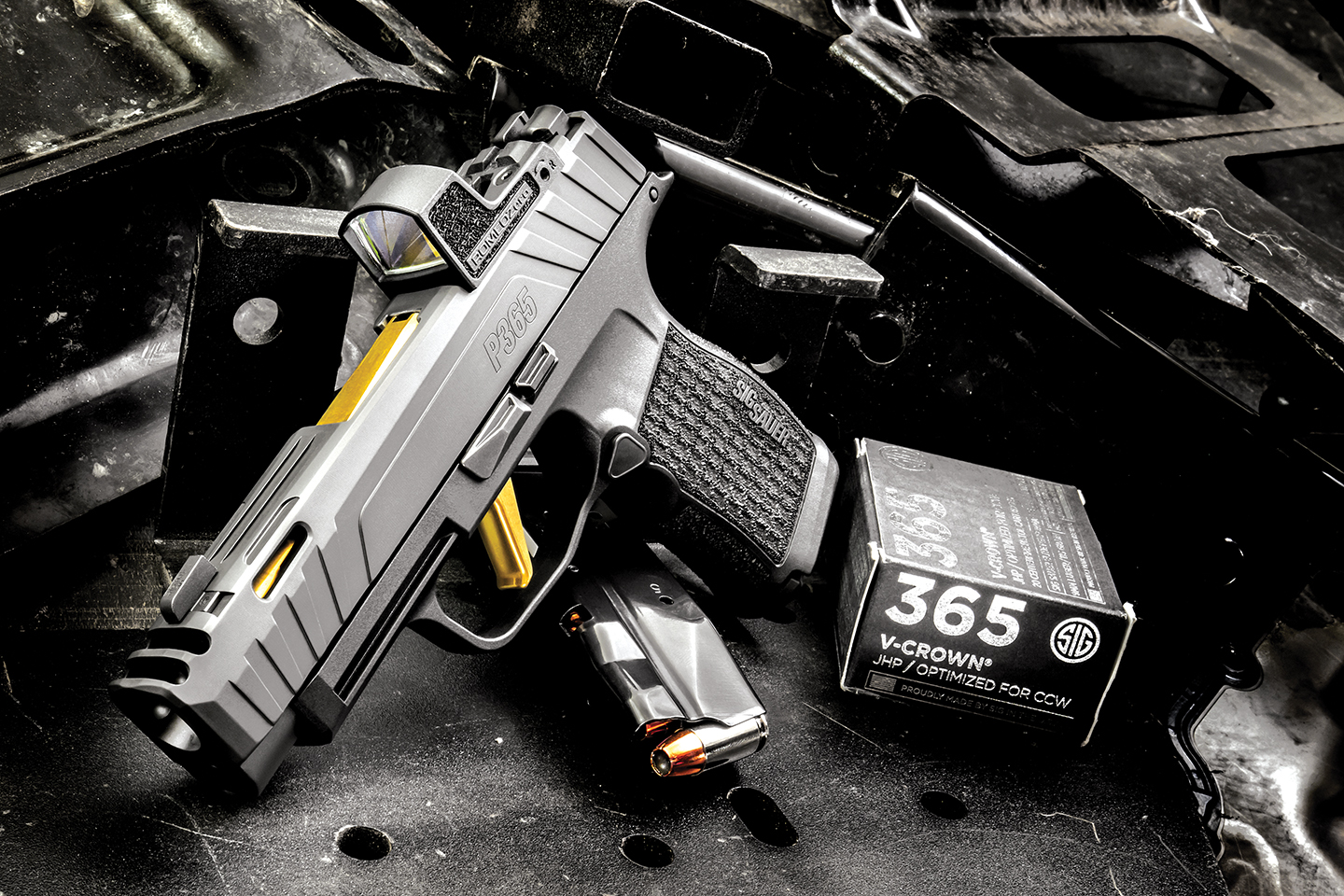 A comped & cut factory custom with no compromises 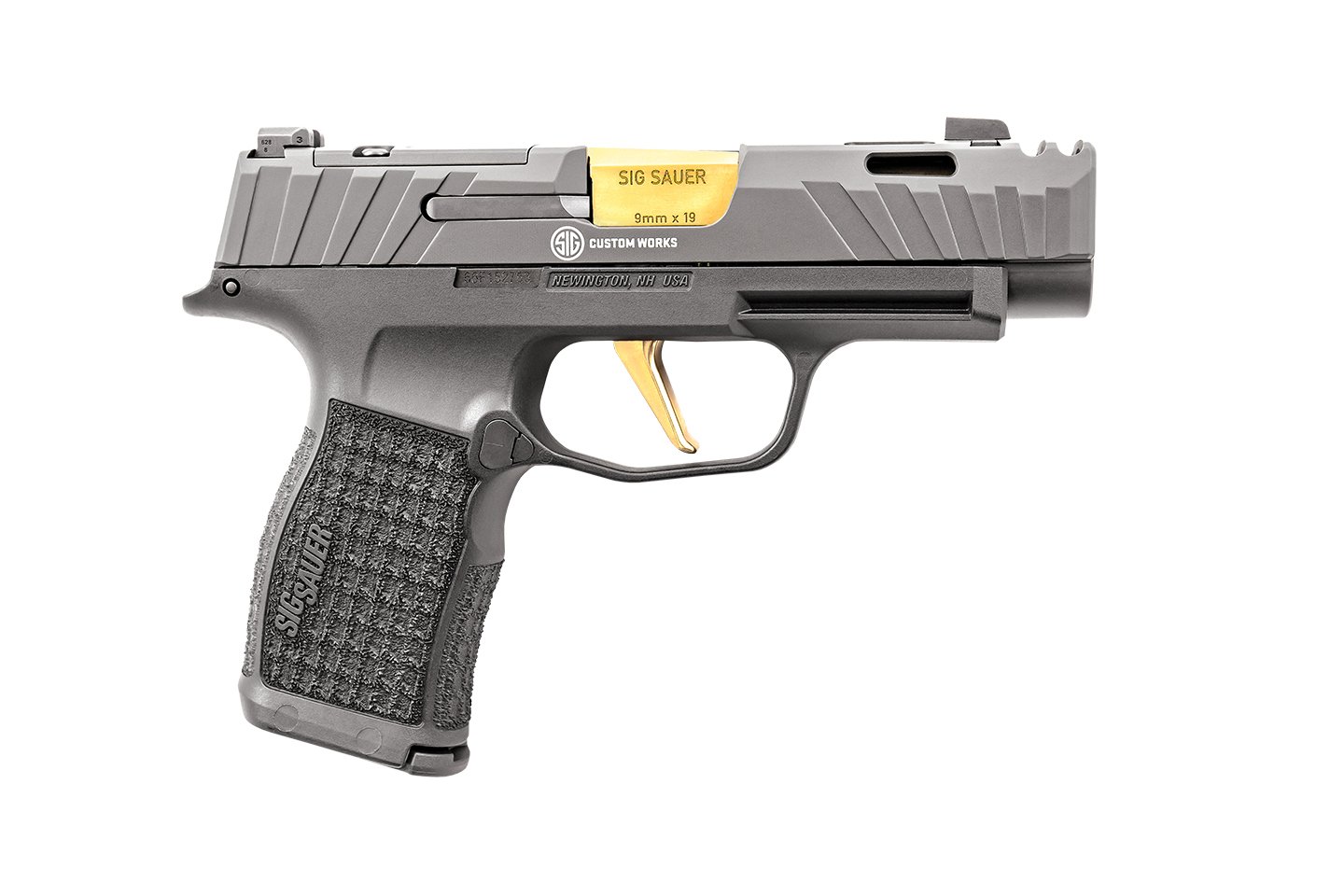 I have been running a P365 since they first hit the market in 2018. It started with the original pistol, then the XL, then both, with and without the Romeo Zero optic attached. They remain one of the few “micro-compact” pistols I’m able to effectively use; they are easy to carry, lightweight, and just large enough for my big hands to wrap around. The XL feels like and operates more like a compact pistol, not your typical micro, and carries a 12-round payload in a flush-fit magazine. Adding the optional 15-round magazine provides even more grip space and control. Running slick, without an optic, you get even easier concealment, a tad less weight, and the same grip and capacity. With the addition of the new XSeries fire controls, you get one of the best triggers on the market for a pistol in this size category. Demand remains off the charts for the P365 line, and a huge aftermarket continues to grow at a steady pace. As usual for the company, Sig Sauer continues to add new offerings to meet demand, and one of their latest may be their best effort yet — the compensated P365 XL Spectre.

The Spectre uses the same standard-capacity 12-round magazines as well as also being able to accept the extended 15-round version. While the standard XL uses a 3.70-inch barrel, this compensated model has a 3-inch barrel with a compensator built into the slide. The total length is identical to the standard XL, allowing it to fit into existing holsters. The slide is optic compatible and machined for any MRDS using the Shield RMSc cut. Sights are XRay3 day/night sights with a subdued rear and a large, easy-to-see front with a green-colored outer ring for daytime use. Both utilize Tritium inserts for nighttime use. Spectre models use the latest XSeries trigger group that has been TiN coated gold. The trigger face is flat, and overall, the trigger has a nice clean break. The grip module is also an XSeries with the LXG laser-sculpted grip texturing. The P365 XL Spectre ships with two 12-round flush-fitting magazines in a Sig Sauer hard plastic case.

Available separately, Sig Sauer’s ROMEOZero mini red-dot optic was added and used throughout my testing of the P365 XL Spectre. Designed at the same time as the P365XL, this optic will fit any pistol using the Shield RMSc slide cut. The ROMEOZero works exceptionally well on the P365 platform; it’s light, matches the pistol perfectly, has a very crisp dot for my 63-year-old eyes, and has held up well to everyday-carry abuse. Its 3 MOA dot (also available with a 6 MOA dot) is very easy to pick up upon presenting the pistol. JM Custom Kydex provided a pair of IWB holsters when initially testing the standard XL — one for use with and the other without an RDS. JM custom has been offering some of the best Kydex you can buy for years, and the Specter fits perfectly.

Downrange precision was remarkably consistent with every other P365 I’ve tested to date. That is to say, excellent. Dot or no dot, this is a very accurate pistol, as accurate as all but a few larger pistols tested under similar conditions. Sig Sauer’s X-Ray3 sights are among my favorites on a carry pistol. Carrying this with or without an RDS, you are not suffering any downrange-precision handicap at reasonable and practical pistol ranges for accuracy, reliability, or usability. My best group at 25-yards was in the 1.25-inch range using Doubletap’s 124-grain match load. Most of the self-defense loads were in the 1.30 to 1.5-inch range, which is truly impressive for a pistol of this size.

The XL version of the P365 has always allowed for a full firing grip, so recoil management has never been an issue for me, but still, the compensator was noticeably helpful. Testing side by side with my standard un-compensated XL, muzzle rise was noticeably reduced

with the Spectre. Using a firm grip, I could perform hammers at 10-yards with no real issue, and it was possible to keep shots on 8-inch steel with ease while shooting offhand at 25-yards. Even at 50-yards, using the truck as a rest and firing as quickly as I could get the dot back on the target, I could stay on the 8-inch steel with relative ease. Running +P loads seemed to provide the most dramatic compensating effect, with the Speer 124-grain +P Gold Dot being unquestionably snappier without the compensator. And, if the muzzle report was louder with the compensator, it wasn’t by much, and the muzzle blast didn’t seem to increase by a noticeable degree either. Like all compensators, it sends more debris up, but even firing it from a position of retention was not problematic.

This is the first XSeries P365 I’ve used and the attributes it brings with it make a noticeable difference for the better. Grip texturing is about perfect for me, and I’m not sure the trigger gets much better in a micro-compact pistol. The compensator worked well with the hotter ammunition and did not appear to offer any increased distraction from blast or debris from the shooter’s perspective. The bottom line is that Sig Sauer has come through with another winner and that the buy-in cost of the P365 XL Spectre, as it ships from the factory, would be less than adding a similar level of customization to your standard P365. See it at your nearest SIG dealer, or for more information, contact SIG Sauer; Tel.: (603) 610-3000; Web: www.sigsauer.com.

Groups fired from a bag (rest) using the back of a truck as a rest at a distance of 25 yards, with three five-shot groups for comparison. Velocity in Feet Per Second (FPS) was measured with a LabRadar.