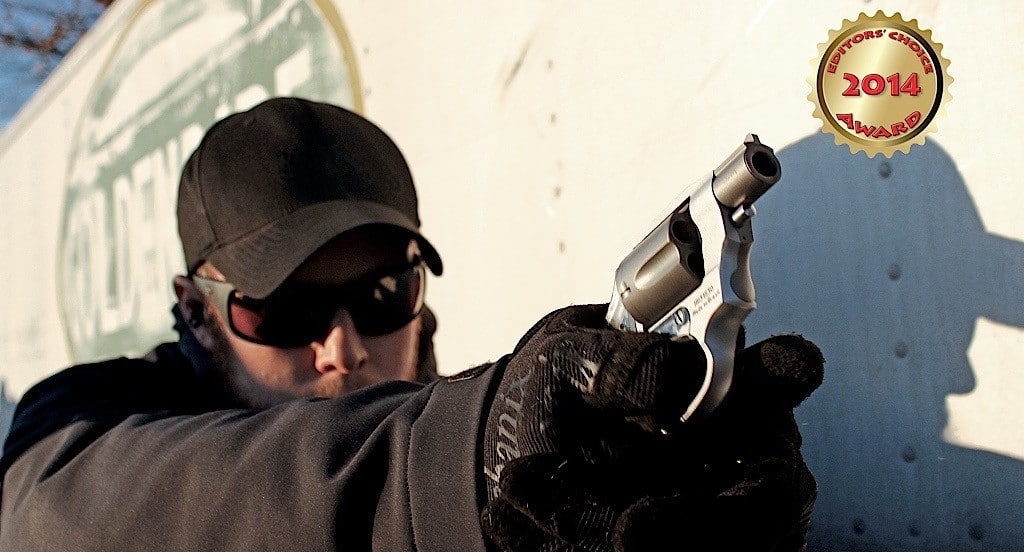 With public interest in concealed carry at an all-time high, it’s not surprising that firearms manufacturers are focusing on this fast-growing segment of the handgun market. As a result, there is now a bewildering array of “concealed carry” handguns available, and consumers have to prioritize their requirements to make the right choice in a carry gun.

Caliber and ammo capacity are certainly important considerations. A carry gun needs to be capable of stopping an armed aggressor for sure with its onboard ammo supply. If it can’t do that, you might as well carry a club for self defense.
Equally important is the size and weight of the gun. If it’s too big or too heavy to carry comfortably and/or conceal effectively, it may not wind up on your belt or in your purse when you actually need it. Finding your sweet spot among size, weight, concealability and firepower is the name of the game in choosing the right concealed carry handgun.
An obvious choice for consideration is the new Taurus View revolver. It gets its name from the clear Lexan frame panel that reveals the workings of the trigger and hammer components, but while that’s certainly an intriguing feature, it’s not why you’re reading about it here. The View has earned an Editors’ Choice Award on pure technical achievement: it is smallest, lightest, centerfire revolver in the world.
Chambered in .38 Special—the cartridge that met the needs of front-line law enforcement for over 70 years—the View packs a meaningful punch in micro-sized platform that weighs only 9.6 oz. empty. Dimensionally, it measures 3.5” H x 5.67” L x 1.35” W, making it readily concealable in a pants pocket.
Based on the Taurus Model 85 platform, the View is built on a silver-anodized aluminum frame with 5-round steel cylinder, but unlike its Model 85 cousins it is rated for standard-pressure .38 Special ammunition only (NOT +P ammo). Priced at $599, the View is also available with a pink-anodized frame for the same price.
A number of design factors contribute to the View’s tiny footprint and amazingly light weight. It’s aluminum frame, Lexan side panel, stubby, 1.41-inch barrel, abbreviated grip frame, ultra-thin grip panels and spur-less hammer shave almost an inch off both the length and height of the smallest Model 85, and cut the weight almost in half. 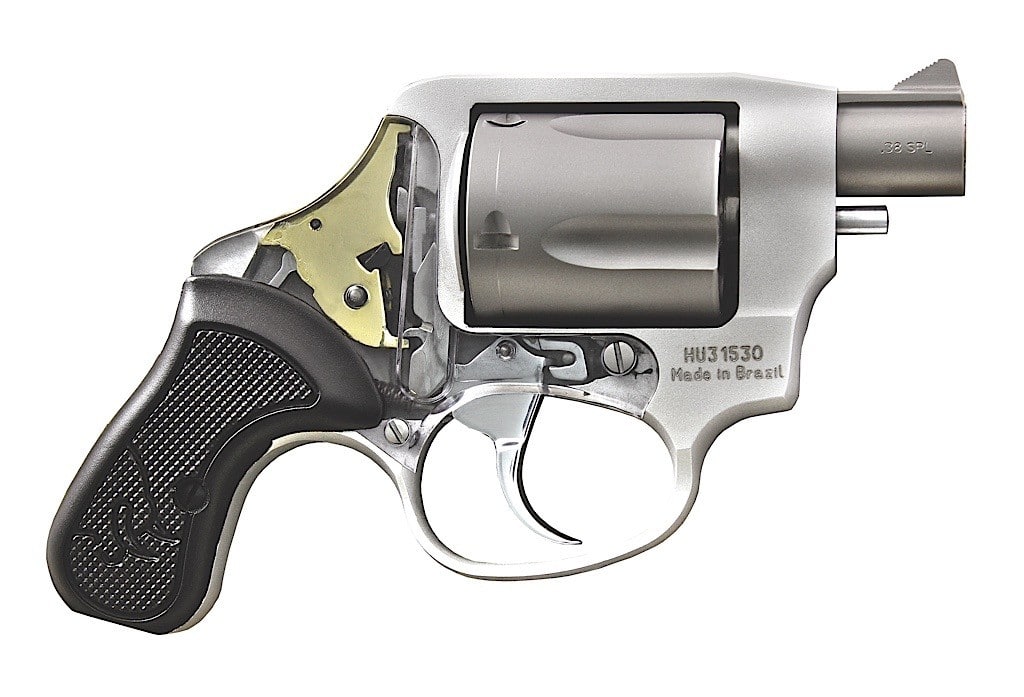 Like most things in life, however, those benefits come at a price—a couple of them in fact. The View’s grip is so short that we could only get a one-and-a-half-finger wrap around it, and so shallow and thin that the tips of those two fingers bottomed out against the palm of the hand. The super-short barrel aids in concealability, but it also works to reduce the nominal muzzle velocity of the .38 Special round somewhat. 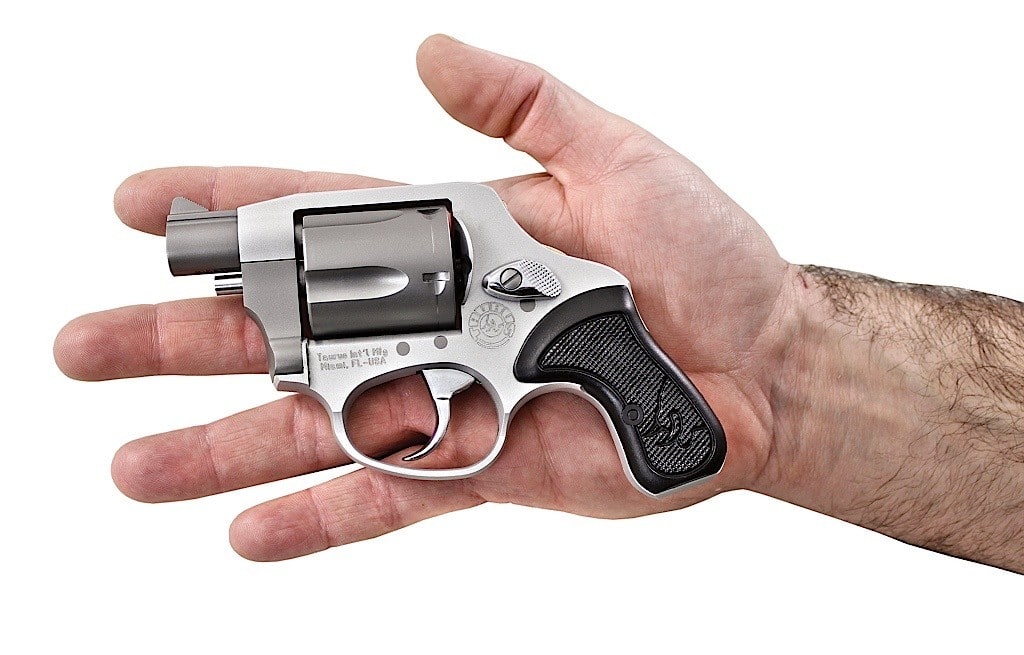 The view is a double-action-only revolver with a spur-less, flush hammer, which is fired simply by pulling the trigger all the way to the rear. The face of the hammer is recessed to prevent it from contacting the rear of the firing pin, with a connector that rises up out of the frame to fill the recess and make contact with the firing pin when the hammer drops. No manual safety is included. The trigger pull weight averaged 11 lbs. 7 oz., with a stroke length of 0.75”. Despite its hefty pull weight, the trigger was relatively easy to stage to cylinder lock with a little bit of practice
Sights consist of a ramped and serrated front post machined integrally with the barrel, and a rear notch and groove machined into the top of the frame. The frame is finished in matte silver anodizing, while the barrel, cylinder, yoke and flush pin heads are finished in a contrasting darker matte gray. The cylinder latch and trigger are chrome plated, and the hammer is brass plated. The super-skinny grips are made from black polymer, with molded-in checkering, and the right-side grip panel is both thicker and more radiused to provide a bit more palm fill for a right-handed shooter. It’s equipped with the Taurus Security System and is covered by the Taurus Lifetime Repair Policy. 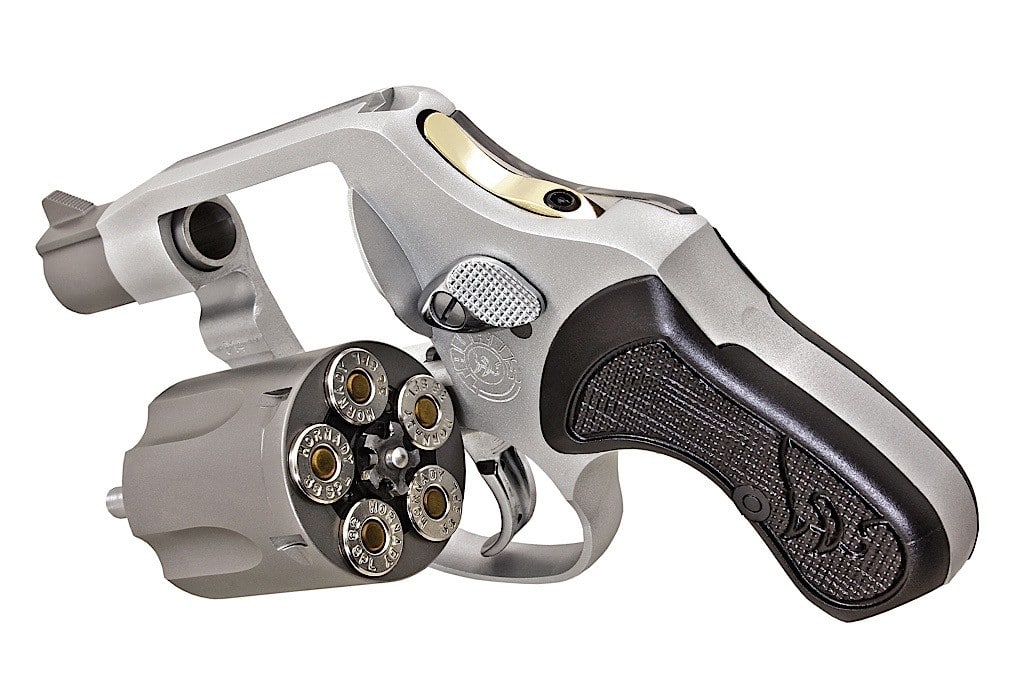 We tested the View using standard-pressure 90-gr. Hornady FTX Critical Defense LITE (instrumental velocity 1,200 f.p.s./288 ft. lbs.) and Federal Premium Personal Defense Nyclad HP (instrumental velocity 830 f.p.s./191 ft. lbs.). Reliability was 100% but, as expected, perceived recoil with this 9-ounce micro-revolver was stout, but not unmanageable. Because the View is a “save-your-ass” gun, we tested it for accuracy at knife-fighting range: 7-yards. Despite its abbreviated grip, heavy trigger and stubby barrel, it punched center-of-mass holes in group sizes averaging just over three inches. See it at your firearms retailer, or for more information contact Taurus USA, Dept. OT; Tel.: (305) 624-1115; Web www.taurususa.com