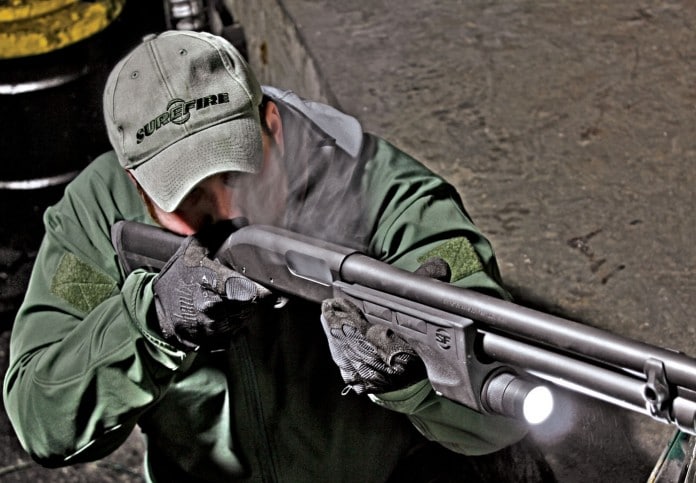 The tactical shotgun is arguably the best all-around choice for most people as a personal/home defense weapon. Whether a pump or semi-auto, fitted with an extended magazine tube and stoked with a full load of 00 buckshot, a tactical shotgun brings overwhelming firepower to a close-quarters fight. It doesn’t require a specialized skill set or demand pinpoint accuracy, making it a highly effective choice for the average homeowner. Since the vast majority of home invasions occur at night, however, you’ll want to add a good tactical light for positive identification and targeting of the threat.

If you own a Remington 870, Mossberg 500/590, Benelli M1/M2, Winchester 1200/1300 or FNH P-12 shotgun, Surefire makes adding tactical illumination quick and simple with their DFS Series Shotgun Forend Weaponlights. This combination forend/tactical light is a direct replacement for the factory forend, and features a dual illumination Surefire tactical light housed within an indestructible, ambidextrous, ergonomically shaped, molded polymer forend. Powered by two 3-volt 123A Lithium batteries, it provides switch-selectable 200- or 600-lumen illumination at the touch of one of the two rubber touch pads positioned on each side of the forend—one for momentary activation and one for constant-on. Whether you’re right or left handed, one of the momentary switches will fall directly under the thumb of your weak-side hand, while the offside constant on switch is positioned to be easily activated with the middle and ring fingers of the same hand.

The tactical light module is mounted forward of the battery compartment, and unscrews for access to the batteries. A system-disable switch located at the rear on the underside of the battery compartment prevents accidental activation during transport or storage. The only switch that is not ambidextrous is the selector that toggles between 200- and 600-lumen illumination modes, which is located on the left side at the rear of the forend.

Illumination is produced by a recoil-proof LED focused by a precision reflector to create a smooth, wide beam optimized for close- to medium-range shotgun applications, but with enough reach and surround light to properly identify threats and maintain situational awareness. Run time is 1.5 hours at 600 lumens, and 3.0 hours at 200.

Our evaluation unit was the Remington 870 model, which we mounted on a staff-owned 870 Tactical for testing. It was an easy and straight-forward installation. While the DSF was slightly heavier than the factory forend it replaced, the added weight went unnoticed. The activation and mode-selection switches were easy to find and operate in the dark, and the forend’s textured surface provided a secure grip when racking the slide. The light itself provided outstanding area illumination, and when set on 600-lumen output, the beam was plenty bright to identify and engage targets out beyond 40 yards.