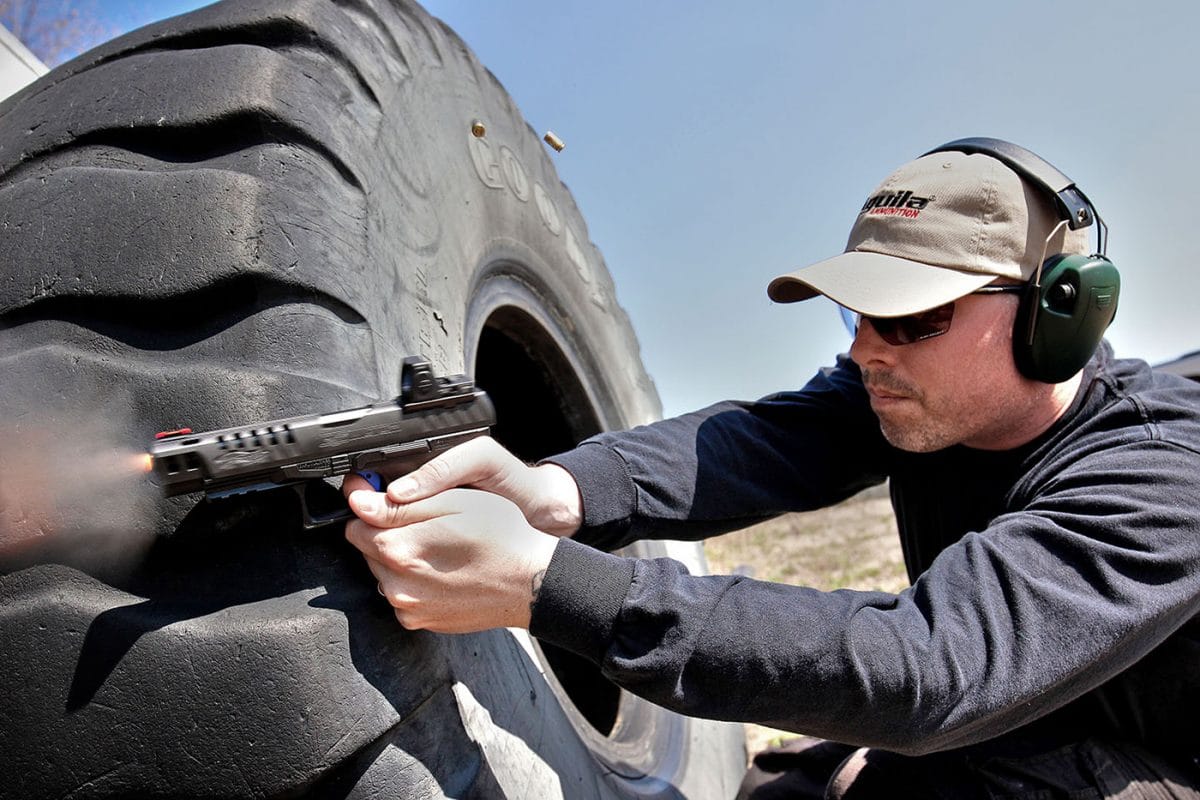 Although it does not bear the PPQ name, there’s no doubt about its pedigree. This is clearly a PPQ all dressed up for production class competitive shooters. “PPQ”, by the way, stands for “Police Pistol Quick Defense Trigger,” and the Q5 Match has a blue one. It’s also equipped with a 5-inch match-grade barrel and a long slide with sixteen ports forward of the trigger guard to reduce weight and improve balance.

Its signature feature is an optic mounting platform machined out of the top of the slide at the rear. It comes with a steel cover plate installed, into which the fully adjustable rear sight is dovetailed. The rear sight cover plate is easily detached by removing two hex head machine screws with the supplied Allen wrench. Installing one of the three included steel mounting plates—one each for a Trijicon RMR, a Leupold Delta Point or a Docter red-dot optic—is as easy as reinstalling those two machine screws.

The Q5 Match is a big pistol, but not a heavy or bulky one. It measures 8.1” L x 5.3” H x 1.3” W and weighs 26.0 oz. empty without magazine. The excellent ergonomics of the PPQ polymer frame combined with the gun’s light weight, perfect balance and quick pointability produce a pistol that’s going to be winning a lot of production class matches.

Competition shooters will appreciate the Q5’s big, round, easy-to-reach, ambidextrous magazine release, its front and rear slide serrations and its long, serrated slide release that can be thumbed down without breaking the firing grip. They’ll also like the three 15-round magazines that come with it. To underline the fact that the Q5 Match is a PPQ all dressed up in competition duds, its magazines are marked “PPQ M Series Cal. 9mm.”

And then there’s that heavenly “Police Pistol Quick Defense Trigger,” in royal blue no less. Walther rates the trigger pull weight at 5.6 pounds, but it feels much lighter. And the trigger on our sample pistol was lighter, breaking cleanly at a consistent pull weight of 4 lbs. 9 oz.—a full pound lighter than advertised—with no creep, stacking or over travel. Total trigger travel measured 0.4” in two pronounced “stages,” and it reset with only 0.1” of forward travel.

At the range there were no surprises. The other PPQs were all obscenely accurate, and the Q5 Match was no exception.

For testing we removed the rear sight and installed a Trijicon RMR mini reflex sight ($708) with adjustable LED on the slide’s mounting platform. For testing from the bench at 25 yards we chose Black Hills 124-gr. JHP +P (1,200 f.p.s./397 ft. lbs.), Sig Sauer Elite Performance V-Crown 115-gr. JHP (1,185 f.p.s./359 ft. lbs.), Federal Premium 150-gr. Micro HST JHP (900 f.p.s./270 ft. lbs. and the new Liberty Civil Defense 50-gr. lead free (2,000 f.p.s./450 ft. lbs.). Recoil was modest with all rounds tested and reliability was 100%. There was no evidence whatsoever of “first round syndrome”—where the first hand chambered round tends to be a flyer—and the combination of the Q5’s outstanding trigger and the precision of the RMR’s little red dot turned in some amazing 5-shot groups. All measurements below are center to center, rounded off to the nearest 100th of an inch.