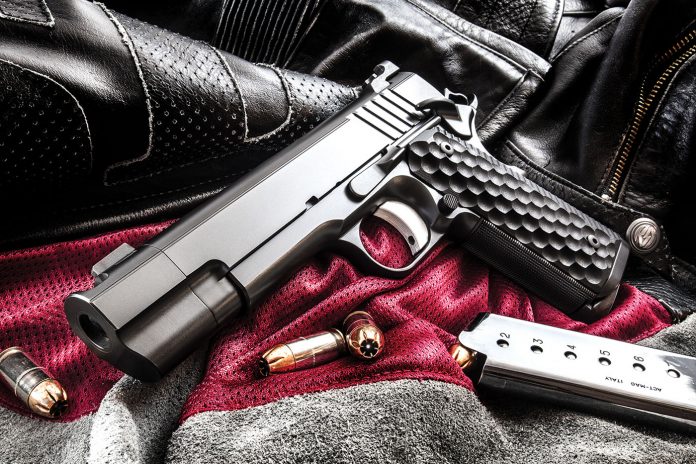 Compensated pistols have always been surrounded by significant argument when applied to defensive or carry use. I recall arguments surrounding compensated (or ported) semi-autos twenty years ago, revolvers longer than that. A couple local agencies used them on their SWAT team. After setting some clothing and gear on fire they faded from favor but they worked.

Muzzle rise was less, as was felt recoil, especially on the short .40 calibers. Most were ported barrels with cuts in the slide. External compensators were mostly competition affairs, adding length to what were long pistols to begin with. When they did not come loose or get shot off the barrel they worked great and remain the mainstay of very high-end race guns. Until recently they remained mostly competition devices, but changes in machining and design have brought them back to the carry pistol, adding another option for taming recoil and muzzle rise, matching the improvements in current ammunition.

Many competition pistols use compensators and brakes, most carry designs focus on compensation only. Ports face up and compensate for muzzle rise with some recoil mitigation. A few brakes are out there in niche handguns for “tactical” purposes, but most seem more problematic than helpful, like a solution in search of a problem.

Screwing a brake on the end of your threaded barrel does not always prove helpful or safe, but compensated pistols, especially 1911-style designs, are catching on. Unlike add-ons, they are designed from the ground up and are permanently attached, eliminating the most critical issue. Contoured to match the rest of the pistol they are seamless, even unnoticeable in many cases. In the case of a 1911, they match the length of a full-sized pistol using a commander-length barrel (4”). That means they fit in your holsters and are more than capable of comfortable, every-day carry. Available in 9mm and .45 ACP, Nighthawk Custom’s Firehawk is a perfect example.

Nighthawk’s Firehawk uses a proprietary compensator designed specifically for this pistol. Using a government frame, it is expertly checkered at 25 LPI on the mainspring housing and front strap. Its single-piece magwell is blended to the frame with a slight taper at the rear for concealed carry. The trigger is curved and solid measuring a crisp 3.7 pounds. Available in black or stainless steel, my test pistol is black using grips developed by Railscails for the Nighthawk Agent 1 1911. Machined from premium G10, they use the honeycomb pattern found on Railscails handguard panels for the AR. The slide stop is beveled and recessed for a clean look. The safety is single sided but can be ordered in an ambidextrous model. The magazine release is slightly extended and serrated. The front strap uses an ultra-high-cut grip safety with the typical bump at the bottom.

The slide includes a French border, a very nice touch that lines up nicely with the compensator. The rear of the slide is serrated, with a smooth top and includes a Heine ledge rear sight with no dots or inserts. Rear cocking serrations are wide and easy to access. Its 3.9-inch bull barrel is threaded specifically for the 1.1-inch long compensator to facilitate final alignment. Once assembled it is permanent. A single port has been shaped to insure proper compensation without disturbing the shooter. The front sight—an 18k gold bead—sits in a dovetail on the compensator. The guide rod is solid, with a return spring custom designed to use a reverse plug. Lots of moving parts here, including the effect of the port. Slide timing is everything when it comes to reliability, so it was all designed specifically for this pistol.