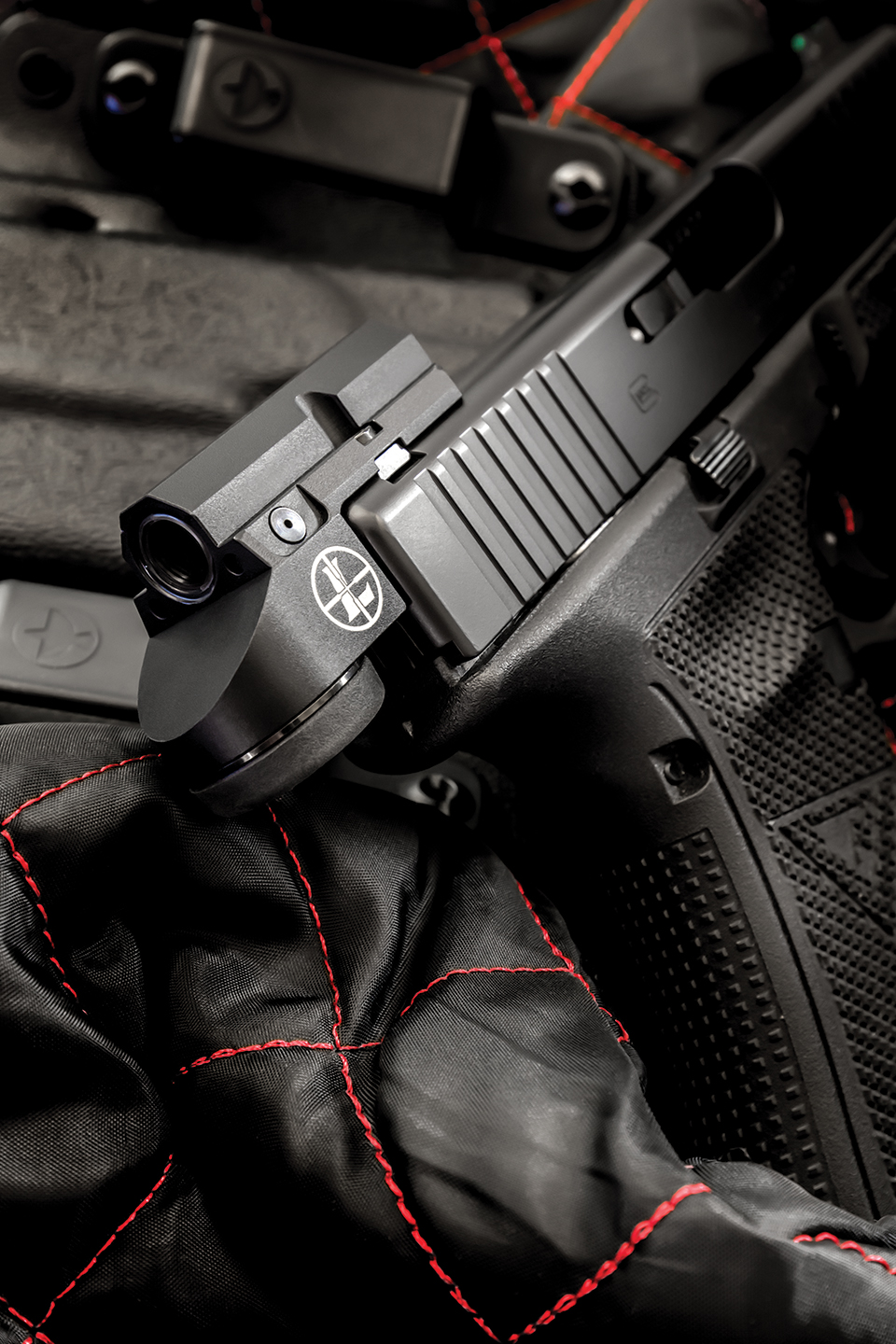 Leupold has recently introduced a new red-dot sight that is a direct replacement for your pistol’s rear sight and it’s called the DeltaPoint Micro ($399.99). Our first impressions were that it’s unique, clever and well-thought out, but has an appearance only a mother, uh, project manager could love. But don’t let aesthetics get in the way of function, and remember, beauty is on the inside too—which is certainly the case for the DeltaPoint Micro.

All joking aside, the DP Micro features an enclosed emitter positioned within what can only be described as a short, oversized straw. Aside from its non-standard appearance, the enclosed emitter means no fogging, dot deformation due to moisture, dirt or debris—making it ideal for use on exposed carry pistols. You’ll also always have a crisp, visible dot each time you present your handgun, very unlike more traditional open emitter optics whose dot can quickly turn into a starburst when a water droplet rests up against the glass encasement of the LED emitter.

Due to its long tubular shape, it’s very easy for your eye to naturally align and pick up the dot upon presentation, very unlike traditional reflex sights which can leave users (especially new ones) fishing for the dot.

While there are a lot of unique features that the DP Micro brings to the table, one of the most useful is how low it sits in relation to the top of the slide. It sits so low that it replicates the same sight plane as traditional iron sights. This means the dot is more intuitive to pick up and transition to for those with years of practice with iron-sights. An additional benefit to this positioning is that suppressor height iron sights are unneeded your factory front sight will do—effectively co-witnessing with the DP Micro. Yet another benefit to this placement is, should you experience battery failure, the sight acts very much like a ghost ring rear aperture; simply align your front sight in the bottom 1/3 of the window and use the two milled holes on the back of the sight to align with the front sight and you’re back making solid hits.

The DP Micro weighs just 1.1 ounces and slides into the rear sight dovetail of any Glock or S&W M&P pistol (the two model-specific DP Micro sights that currently exist). Simply drift your rear iron sight out of the dovetail and slide the supplied attachment piece in its place. Place the DP Micro on top of that dovetail and align the two screw holes and ensure the DP Micro is as close to the center of the pistol’s slide as possible. Using the supplied M4x7x5 7mm Torx screws, affix the sight to the slide and secure the screws by applying 25 inch-pounds of torque. This creates a press fit and mounts the DP Micro securely in place. Installation is simple and straightforward, and doesn’t require aftermarket alterations to your pistol, milling, specialized mounting plates or other accessories.

Once the sight is mounted, you’ll notice the battery compartment/dot intensity adjustment are easily accessible on the bottom side of the rear of the housing. Install the included CR1632 lithium battery and you’re off to the races. In our experience, if you’ve centered the sight on your pistol’s slide during installation, very minimal adjustment will be needed to attain point of aim/point of impact grouping at 25 yards. When done correctly, zeroing is painless.

The 3 MOA dot size is the sweet spot for a pistol allowing the right mix of speed and precision. Having the ability to choose from 8 different dot intensity settings on the fly allowed us to dial the proper brightness to achieve the tightest groups possible at distance, while still having the ability to burn down targets up close. Due to the overhanging battery compartment, when it’s time to replace the battery, it won’t be necessary to re-zero the sight after the swap, a feature we were grateful for.

Battery life is dependent on a number of factors. We have yet to replace ours, but expect to see between 500 and 10,000 hours on a single battery depending on the level of dot intensity selected, and how long is left on. The DP Micro does have a power saving mode, meaning that if the optic remains dormant for several minutes, it will power down. Once it senses movement it lights right back up, and to the brightness setting it was previously set at.

The sleek, low-profile design has minimal effects on the original look of the pistol and we found it to have no impact on the concealability of our Wilson Combat Glock 45, on which it was mounted and functioned flawlessly on. The sight window is indeed tiny, but the glass is

very clear and we found the dot was just as quick (and easier) to locate in the window as its bigger brother, the DeltaPoint PRO.

As we make the transition into a new decade, handgunners are realizing a new normal; miniature red-dot sights are quickly becoming the primary sighting system on virtually all pistols—hunting, sport shooting, concealed carry and service. Those looking to transition to a red-dot sight on a pistol they already own would be hard pressed to choose a better sight than Leupold’s DP Micro. It requires no modifications to the host pistol, is super easy to install, sits low in relationship to the bore and it co-witnesses with your factory front sight—those accustomed to iron sights will enjoy a seamless transition to the red-dot life. Welcome to the future! See it at your dealer, or for more information contact Leupold; Tel.: (800) LEUPOLD; Web: www.leupold.com.