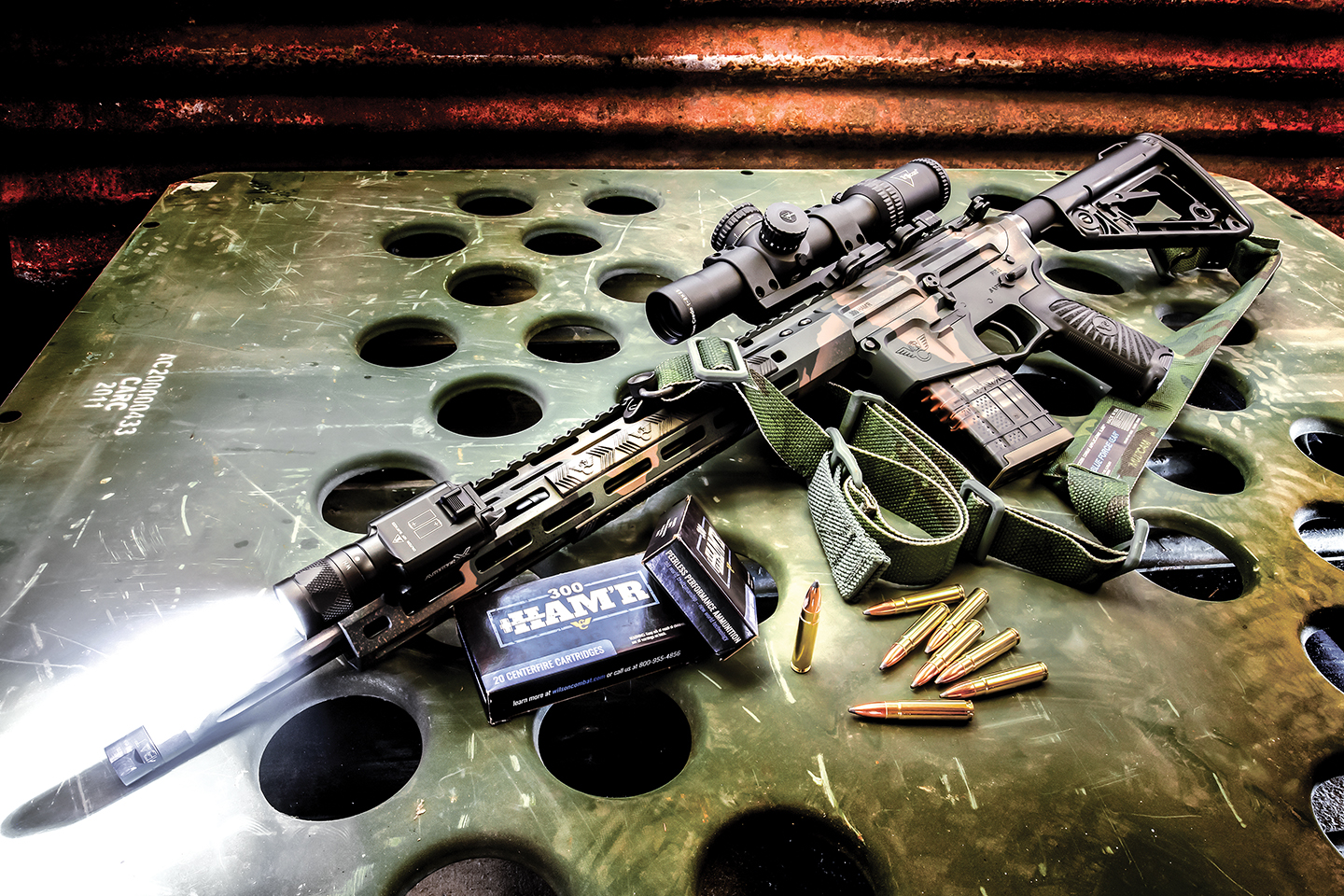 From homestead defense to meat in the freezer, the versatility of this rifle/cartridge combination is pretty tough to beat

Developed over a timespan of ten years, Bill Wilson’s 300 HAM’R cartridge starts with a 300 BLK case, but the similarity ends there. This round was designed to be the most-versatile AR-15 “ranch rifle” chambering in existence — one that’s a capable hunter out to 300+ yards while protecting stock from four-legged predators and family from two-legged threats. Extending the 300 BLK case improved accuracy and consistency using proven .308 bullets. Increased case capacity and more efficient powders bumped velocity close to 200 fps above the 300 BLK without increasing chamber pressure. Using a slower twist rate made for better long-range consistency using bullets from 110-150 grains, and keeping the .223 bolt makes it a simple barrel swap. Having been in use for several years, it has proven capable of taking medium-sized game to 500-yards and even some larger game within 300 yards. Because of its extreme versatility, it has become one of my favorite AR-15 chamberings to date.

I hunt occasionally, but decades using a rifle on duty or during SWAT operations places my expertise squarely on the tactical side. Always open to improvement over the 223 Remington, I have tested and deployed rifles in 300 BLK, 6.8 SPC, 6.5 Grendel, 7.62 x 39mm, 5.45x 39mm, and even 308 Win from CQB distances. Reaching out longer distances, you can add the 6.5mm’s and the latest 6 ARC; all have their strengths, weaknesses, and limitations. Weight, reliability, and recoil are always factors with .308-based cartridges and functionality and bullet selection with the Russian calibers. The others require special bolts, magazines, or both. Accuracy in the 300 BLK is ammunition dependent, with huge swings at longer ranges — if your world never exceeds 100-yards, it’s great. Wilson Combat’s 300 HAM’R addresses CQB with Lehigh Defense’s Controlled Chaos bullets and 300-yards with hunting bullets from 110 to 150 grains.

Wilson’s Tactical Hunter uses a match-grade, 18-inch, fluted stainless-steel barrel using a 1-13 twist rate and a muzzle that’s threaded to 5/8 x 24 with an included thread protector. Since the 300 HAM’R was designed around this length, this rifle takes full advantage of the improved ballistics and is perfect for hunting and more than suitable for tactical situations. Shrouding the barrel and mid-length gas system is the company’s 12.6-inch M-Lok compatible forend. Receivers are Wilson Combat’s own in-house-machined billet aluminum pieces. The trigger is a two-stage TTU (Tactical Trigger Unit) measuring 4 pounds of total trigger weight.  The grip is a BCM Gunfighter-based unit with a Wilson Starburst pattern, and the adjustable stock is a Rogers/Wilson Super Stock. The bolt carrier group is a Wilson Combat Premium, which is given an ultra-durable Nickel Boron coating. My test rifle was coated in the company’s latest Armor-Tuff camouflage pattern called Wasteland. This pattern uses a nice blend of darker greens and browns proving versatile in most environments, but if it doesn’t suit your taste, there are several other color schemes available.

The optic used for testing was Trijicon’s 1-8 power Credo with their dual-illuminated (red or green) segmented-circle reticle with MIL adjustments. With crystal-clear class and a versatile reticle that is at home in the field or on the street, it’s built to withstand any condition. Mounted in a Larue SPR 1.5 mount, this system is rock solid and capable of CQB operations while allowing you to competently reach out to the limits of this cartridge.  The rifle ships with one 20-round Lancer magazine.

Every 300 HAM’R I’ve tested has been incredibly accurate. This one was no exception. My best five-shot group using the 95 Grain Controlled Chaos at 100 yards measured less than .50 inches edge to edge.  Everything was under .75 inches at 100 with most closer to half an inch. Switching between bullet weights did not seem to change point-of-impact much, which is a really nice bonus. Groups at 300-yards were in the 2.78 to 3.5-inch range. Wilson Combat’s 300 HAM’R has been one of the most consistently accurate AR15 rounds out to 300 yards that I’ve ever used.

Recoil with a bare muzzle is similar to 6.8 SPC and very close to the 6.5 Grendel or 6mm ARC — that is to say more than a typical .223/5.56mm and nothing like a .308 Winchester. Suppressors soften things a bit and have never added much in the way of excess gas or altered the ejection pattern much of this cartridge fired out of a Wilson Combat rifle. Having run half a dozen suppressors with the 300 HAM’R, there has never been a need for an adjustable gas block or fine-tuning — a product of designing the rifle and caliber at the same time.

I suggest running the Controlled Chaos round for urban defense in general. Its all-copper design makes it perfect for this role, in either the 95 or 100-grain variants — soft shooting, very accurate, and impressive wound channels in gelatin. In my experience, the 125-grain bullets are the real sweet spot for hunting, although Bill Wilson and others have had excellent success with the 130 and even 150-grain projectiles, with similar downrange precision for all. Across the board, 300 HAM’R is accurate, reliable, stable, and very consistent no matter the bullet weight. You will need to use 300 BLK magazines, and the brand of magazine does not seem to be an issue. A 5.56 magazine will work in a pinch, but only for a few rounds, so stick with 300 BLK magazines.

Wilson Combat’s 300 HAM’R delivers vastly improved terminal ballistics over 300 BLK without increasing size, weight, or requiring a bolt swap. Function of this test rifle — just like previous On Target test rifles in 300 HAM’R — was flawless. Wilson Combat can supply barrels, ammunition, uppers, and complete rifles. Ammunition selection improves every year with nearly a dozen different bullets currently available, ranging from 95 to 150-grains, many designed expressly for the 300 HAM’R.  Stock can be spotty given our current situations, but it seems to always be there and without any price gouging.

Current 5.56mm rifles get the job done but remain anything but perfect, especially if your area of operation includes big critters or open spaces. The 300 HAM’R will do anything a .223 or 300 BLK, even a 6.8 SPC will do and a ton of stuff they won’t. It’s the closest so far to meeting what I wanted over two decades ago — an all-purpose carbine suitable for work, play, protection, or hunting, all in a lightweight and accurate package. See the complete line of Wilson Combat rifles, pistols, shotguns, ammunition, and accessories at your nearest dealer, or for more information, contact them directly at; Tel.: (800) 955-4856; Web: www.wilsoncombat.com.

Bullet weight measured in grains, velocity in feet per second (fps) measured using a Magneto Speed V3. Accuracy in inches for three five-round groups fired from 100 yards using a bipod as a rest from behind a bench.