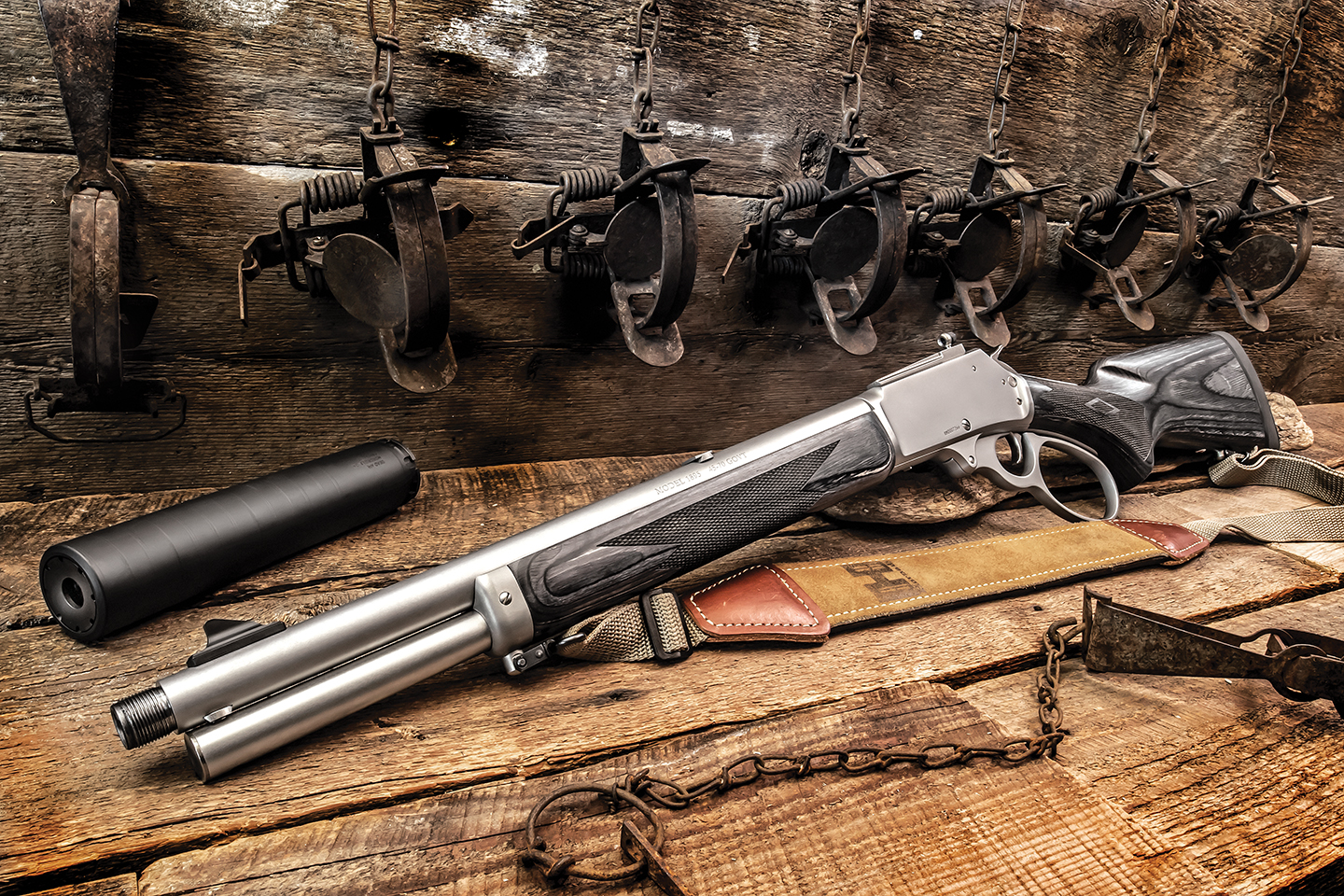 Who would’ve guessed that the best thing for Marlin would be Ruger? 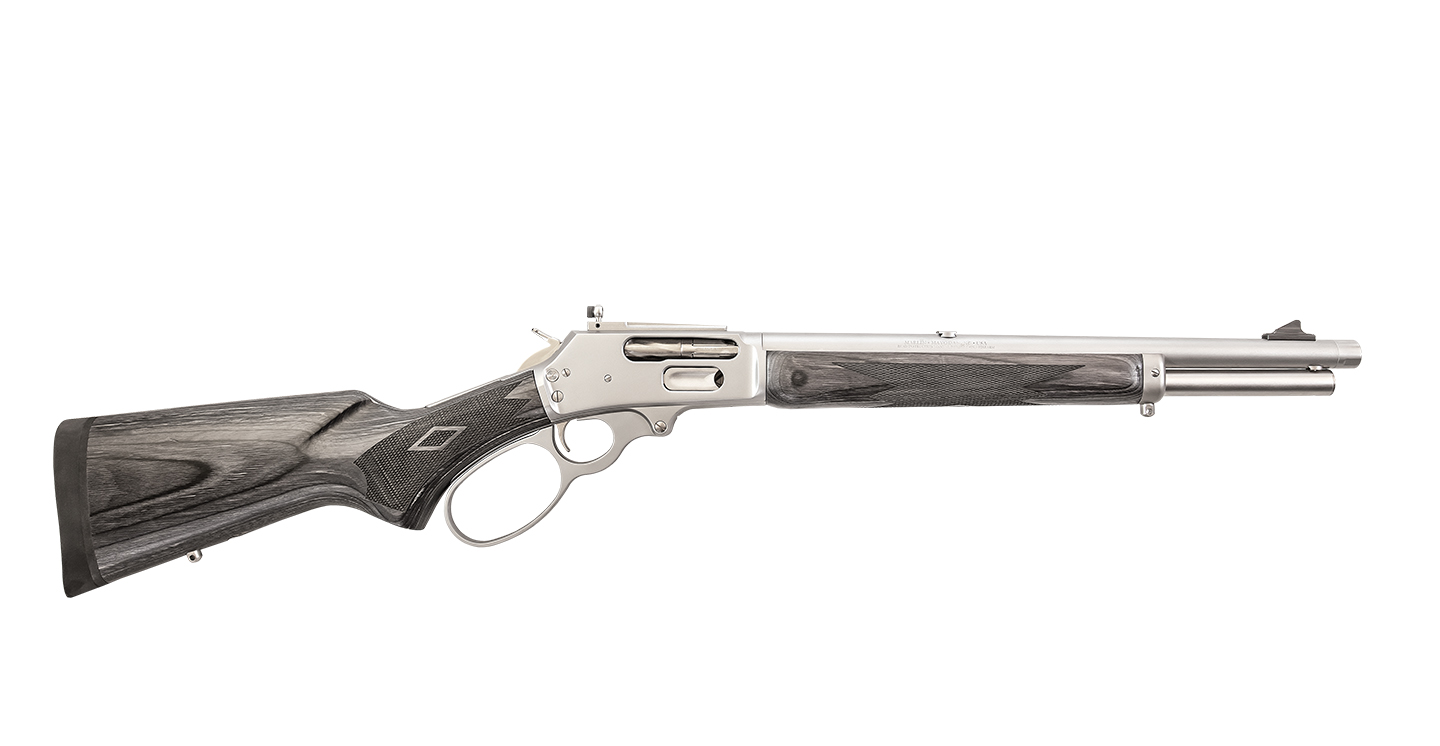 My first experience with a .45-70 lever rifle was well over 20 years ago while training at Thunder Ranch in Texas. Much of the property was dedicated to some very high-value trophy animals, and the staff was allowed to cull the feral hog population whenever possible. This experience prompted the purchase of a Wild West Guns Co-Pilot in 458 WWG / .45-70 Government. I learned a ton with that rifle — both about running the lever actions and the 45-70 caliber. It was one of the handiest big-bore carbines I’ve ever used, just a tad heavy on the recoil side. I did not come back to a .45-70 until a few years ago during a Silencerco event, and it turns out matching a suppressor to an 1895 in this cartridge makes for a pretty pleasant big-bore shooting experience. Luckily, many suppressor options are currently available for big-bore rifles that have the capability of accepting one, and given the reviews to date, I jumped at the chance to test the new threaded-barrel Marlin 1895 Trapper. It did not disappoint.

Lever actions rifles, in general, are amidst a huge resurgence, although mostly in pistol calibers and the venerable 30-30, but the .45-70 is gaining some traction. Marlin’s 1895 is all but iconic for this caliber and is a huge favorite amongst trackers, hunters, and those who may encounter larger game. Touted as capable of taking most any North American game, the cartridge is versatile in today’s loadings. Around since 1873 in its black powder configuration, .45-70 gained some serious power as it moved to modern powders. As bullet design and ammunition manufacturing has improved, it has only gained popularity. Originally developed with 400-500 grain cartridges (mostly 405), newer offerings in 300 grains or even less provide substantial energy on target, deep penetration, and surprising accuracy. For the last several years, it has been considered the quintessential hog killer and a favorite for backcountry use where large predators rule.

Ruger’s purchase of Marlin has been good to the venerable 1895 platform, with evidence of precision manufacturing and improved attention to detail found everywhere. Based on the 1895 SBL, the Trapper uses a shorter cold hammer-forged stainless 16.10-inch barrel that is threaded 11/16 x 24 for suppressor use. Skinner Sights receiver mounted peep rear and blade front sight handle the aiming. Like the barrel, the action is made from stainless steel and bead blasted for a low luster. It’s equipped with a moderately-larger lever loop for use with gloved hands and holds five rounds (plus one in the chamber) in its full-length tubular magazine. Ruger’s improvements include a more refined forend, checkered grip panels, a laser engraved Marlin Horse and Rider logo on the grip, and an overall attention to detail not seen in a long time. The cross-bolt safety remains, but as with all 1895’s, there are “delete” kits for those who would prefer it disappear; I’ve never found it bothersome. All the traditional internal safety mechanisms remain.

Testing included the addition of a .46 caliber Dead Air Silencer Primal suppressor threaded onto the Trapper’s 11/16”-24 muzzle threads. Designed for use with anything from 9mm to .45-70 and .338 Lapua and has no barrel-length restrictions, making it perfectly fine for use on this short 16-inch barrel. The stainless-steel and surprisingly light (16.4-ounces) Primal is one of the most versatile suppressors on the market and can be configured as a direct-thread, quick-attach KeyMo, Xeno, with a pistol booster, or a three-lug. Direct-thread keeps it lighter and as short as possible, helping keep the rifle compact and handy. Sound suppression was outstanding, and as mentioned previously, the Primal made a noticeable impact on reducing felt recoil. At an MSRP of $899, its buy-in cost is very competitive for what you’re getting — especially considering that it will eat about anything you want to send through it, a true multi-purpose sound suppression option. See one at your nearest dealer, or for more information, contact Dead Air Silencers; Tel.: (844) 293-6778; Web: www.deadairsilencers.com.

The 1895 is generally a very accurate rifle but can be challenging to shoot accurately unless you are accustomed to some recoil. While the suppressor knocks down the felt recoil and all but eliminates any flash, it still remains pretty stout with the hotter loads —especially when shooting prone. Still, I managed a 1.5-inch group at 50 yards using the iron sights and Barnes VOR-TX 300-grain TSX (Flat Point) ammunition. Making around 1900 FPS from this barrel, the energy on target is impressive, and the TSX is a proven hunter. Groups were fired using a bag as a rest using the back of my truck; steady, but not bench-rest steady. I commonly stacked three with two fliers, but given the recoil and steady wind and rain, I was happy. I tagged the 12-inch steel at will at 100 meters with the irons, even put a few on the Larue size target at 200 meters. Anything beyond 200 meters, the holdover with irons is pretty significant, and adding a low-power variable optic would be a game changer here. The most comfortable load to shoot was the Hornady 250 grain LEVERevolution. Maybe the most impressive were the 405 grainers; slow with a rainbow trajectory even at 100 yards, but man, did they move steel.

Adding the suppressor did not make this rifle barrel heavy, and it is noticeably more comfortable to shoot with it attached. Suppressing the Trapper is a great way to go if you are going to run it hard at the range. The suppressor also extinguished the two-foot flame you see with most 16-inch barrels in this caliber, and while I have never considered this caliber particularly pleasant to shoot, it is more than controllable with or without the suppressor. The overall quality and component tolerances are about as good as it gets on a production rifle and rival some customs. The current-day 1895 rifle is night and day different from the last batch of Remington-built Marlins. Ruger has really upped the game on these Marlins, which is probably why they are very difficult to get your hands on these days. Everything is tight and smooth, and it fed everything without issue. It just feels nice in the hand, with smooth edges and excellent fit and finish. If you were hesitating to see what the Ruger-made Marlins are like, hesitate no more. Get one if you can — you will not be disappointed! See the new Marlin 1895 Trapper at your nearest dealer, or for more information, contact Marlin Firearms; Tel.: (336) 949-5200; Web: www.marlinfirearms.com

Groups tested from the back of my truck using a bag as a rest—the best group shown over five (5) shot groups from 50 yards.